Bad Idea:
Do it with your ultra-marathon neighbors.

We knew we wanted to hike a fourteener this weekend, and had narrowed it down to either Long's Peak or Gray's and Torrey's (Gray's and Torrey's are on the same mountain). Then, just before dinner, we run into our neighbors, Mike and Jamie, with the typical conversation ensuing. "What's up this weekend?" Suddenly, we find ourselves saddled up with them and one of their friends for what would be a grueling ascent of Long's Peak.

The classic Long's Peak hike (called the Keyhole route) is 15 miles roundtrip with an elevation gain of 5000 ft that places you on top of the Rockies at 14,255. It gets up to Class III climbing near the end, which I would classify as pretty sketchy scrambling. The vast majority of hikers who choose to summit in a day usually start off at the trailhead between 2 and 6 am and get back to the parking lot in the late afternoon. We started at 8 o'clock.

We found out very early on just what we had gotten ourselves into. After only one hour of hiking/speed-walking up a decently sloped path, we had come 3.7 miles and were barely clinging at the heels of our neighbors. Drenched in sweat, we realized this group hike would soon be divided. We let them scream ahead and set our own slower, yet still rushed, pace.

We had come 4 miles in an hour, this hike should be a piece of cake! Then the Class II and III walking/climbing hit you up on the rocky slopes of the peak and things get a little sluggish. The pictures below will probably tell it better than me, but the scrambling for the last two miles was intense, slow, dizzying at times, and fun.

Our neighbors and friend ended up finishing the hike in 7 hours (a blazing time), and we did it in just over 9 (which garnered plenty of astonished complements from our friends, which was nice). We were definitely the last hikers up at the top, though, and lucked out with the weather, getting only a sprinkling of hail during the final push. We summited around 12:30.

Okay enough bad storytelling, here's the gist of it...

The trail below the treeline (Tory was miffed that our mach 5 pace hurtled all this great scenery past us)... 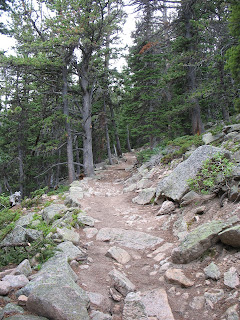 A shot of our destination. This is also where we parted ways with our neighbors. 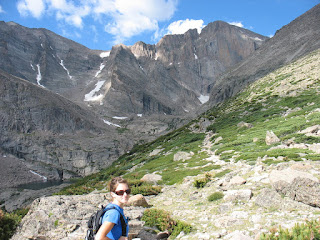 Here's an alternate-angle shot of our destination, from the aptly-named boulder flats, which is the main "base-camp" area for overnighting it. Go away clouds! 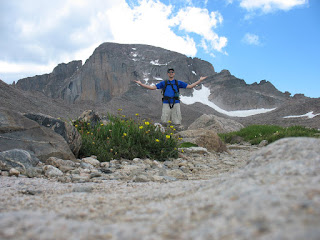 And now we are scrambling up on the steep slopes, with only red dots painted on the rocks to guide our way. 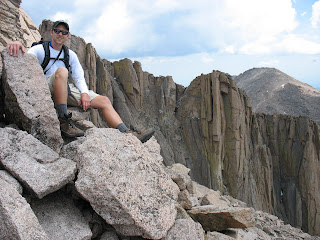 Can you find Tory and some red dots? Might have to enlarge this one. 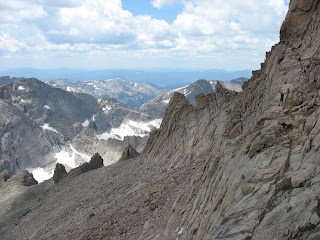 This one shows a pretty scary part involving some delicate hand- and foothold finding. Below Tory is what's called the Trough, a huge rock slide where most of your elevation is gained on the upper trail. Also scary because of the crowds of people (not shown here cause we're going down) kicking loose rock all over the place. 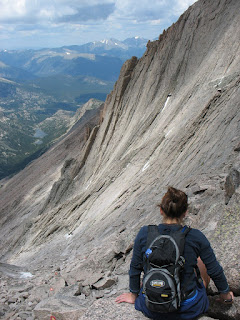 Here we is at the summit. A marmot came sniffing within inches of Tory while she was eating. How rude! Shows you just how popular this hike is. 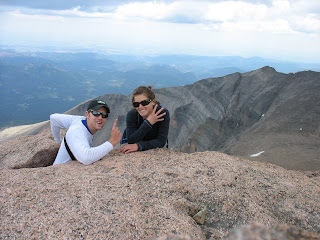 Nuther shot from the summit. 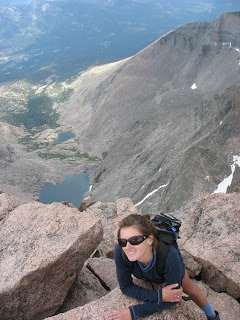 Here we are sliding on our butts coming off the summit. Only a pack of climbers who scaled the face followed. 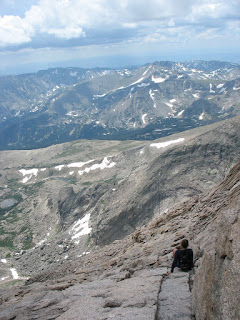 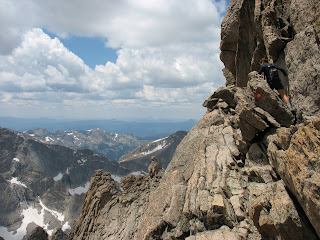 We weren't entirely lucky with the weather this trip. On the way down, this storm hit us just as we hit treeline. 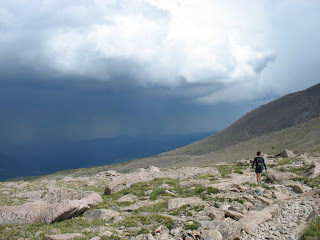 With legs and soles burning, we arrived at the car around 5:30pm, sat in a daze for another 1/2 hour, and drove to Snarf's for dinner back in Boulder. That night we shared some drinks with our neighbors and friend and reminisced over a job...done.

At least now we know the other 14ers will be nothing to worry about, right?

Posted by Carl and Tory Bauer at 6:26 PM

You guys are awesome, crazy, ballsy, and obviously very fit. The elevation doesn't faze (sp?) you at all does it? I guess living at a mile helps...Beautiful scenery. Only 53 more to go!