Earlier this year we very quickly threw together a trip to the Bahamas. For a while we have talked about wanting to go island hopping by kayak and when March rolled around I was longing for a sunny beach and some warm water. We narrowed our possible destinations down to a few, but with only a week off we had to stay relatively close to home. We reached out to Out Island Explorers, a guide and rental company run by a young family. They were able to accommodate us and set us up with all our camping supplies, boats, navigation gear, fresh water, emergency cell phone, route suggestions, and even provided rides to and from the Exuma airport. Apart from all their logistical help, they were also incredibly nice and easy to work with! They responded to all our many questions over email, offered to drive us to get groceries prior to launching, and told us all about island life with two kiddos.

Our flight itinerary: (red eye) Portland > Charlotte (three hour layover + one hour delay for faulty tow gear) > Miami (tight layover due to previous delay) > Georgetown, Exuma. The flight from Miami to Georgetown was only 30 minutes, but what a view... 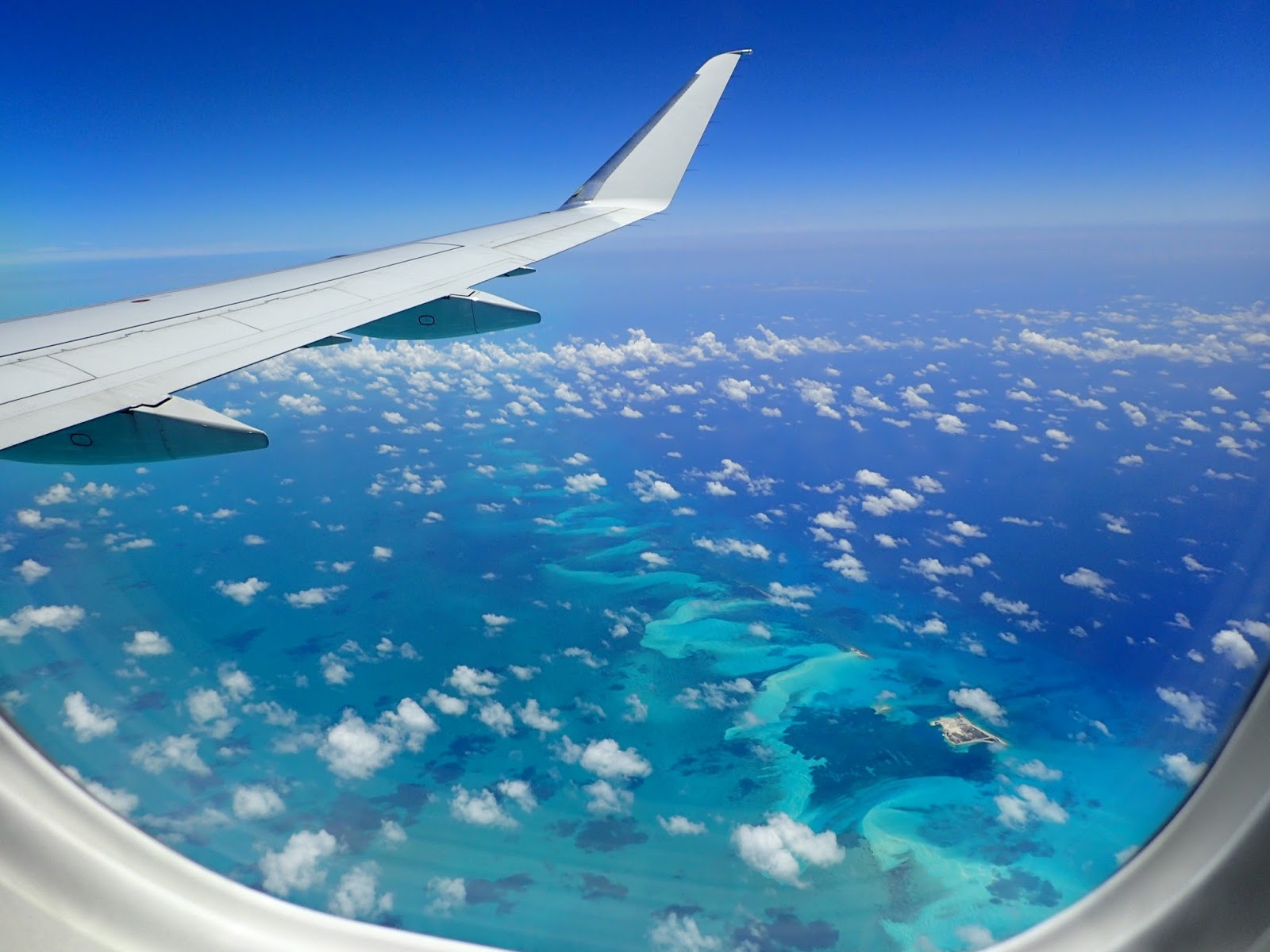 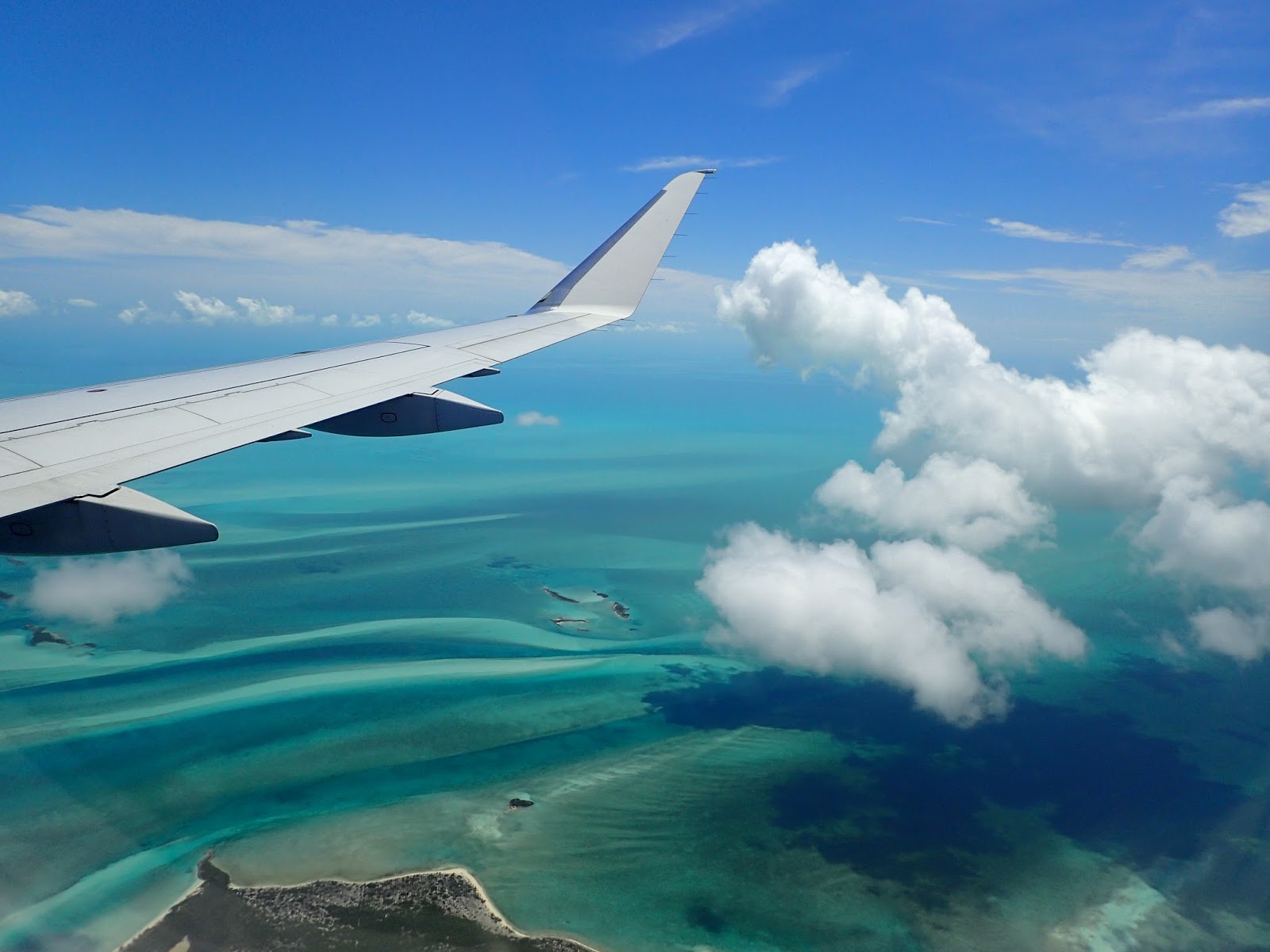 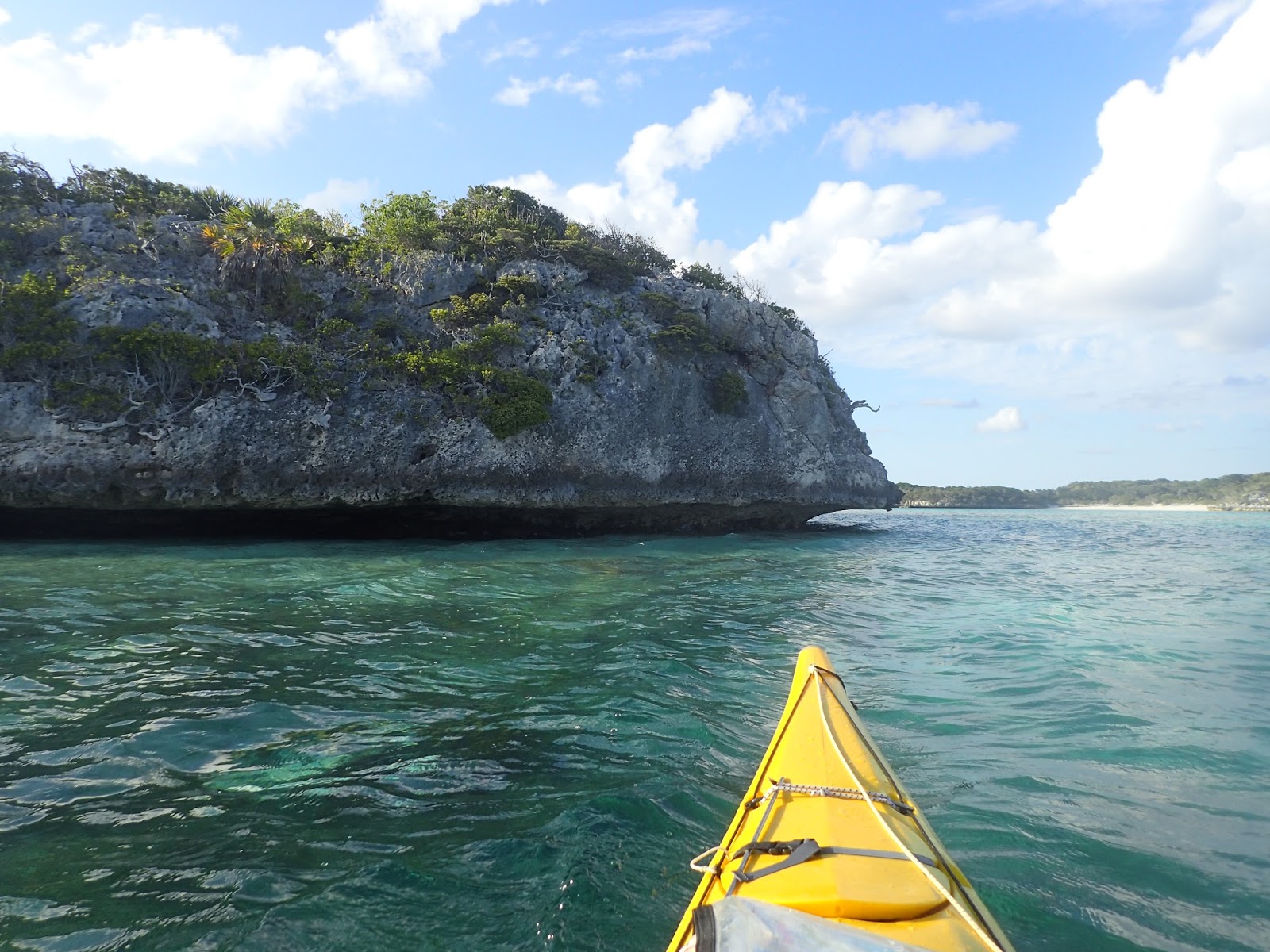 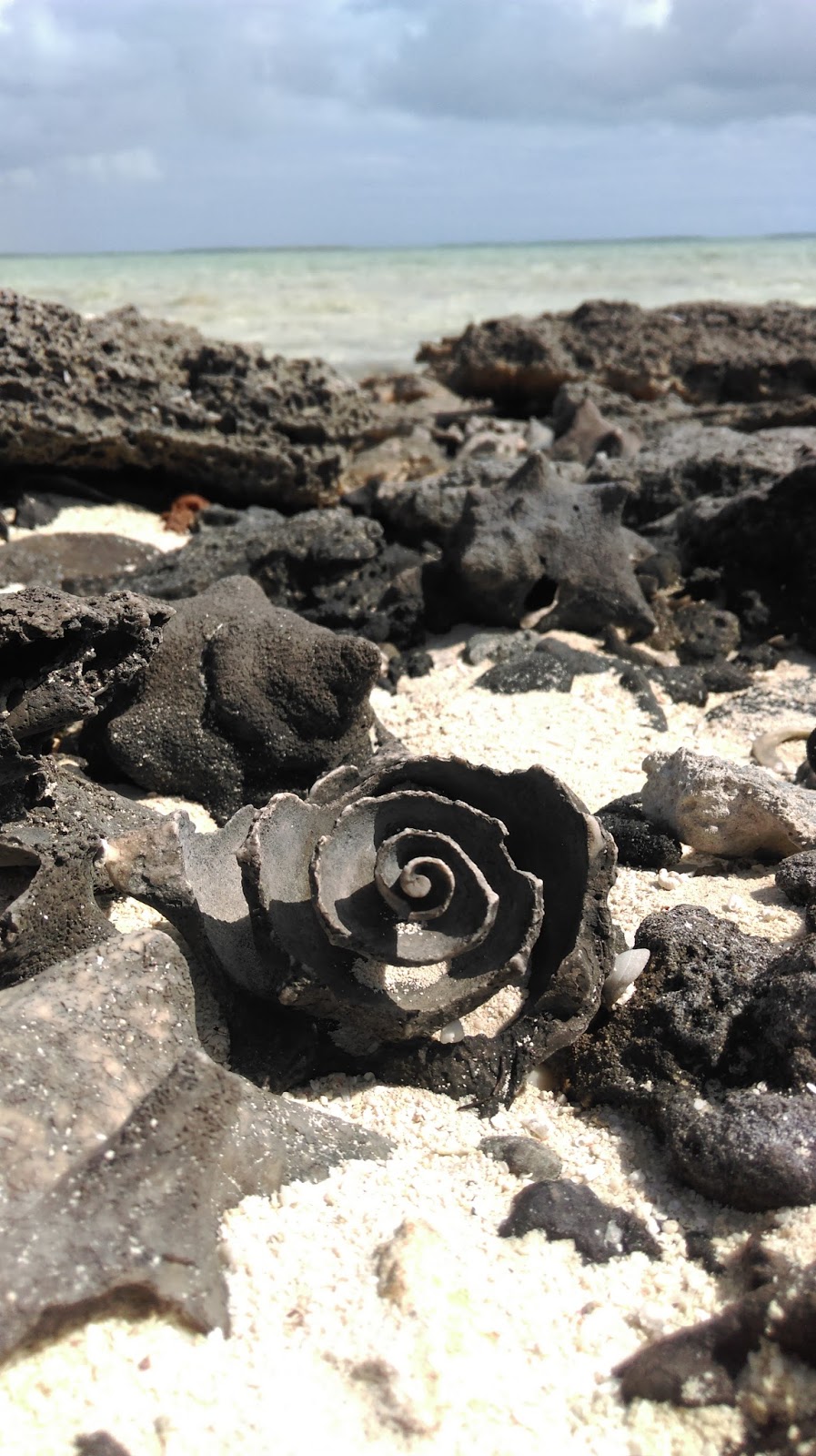 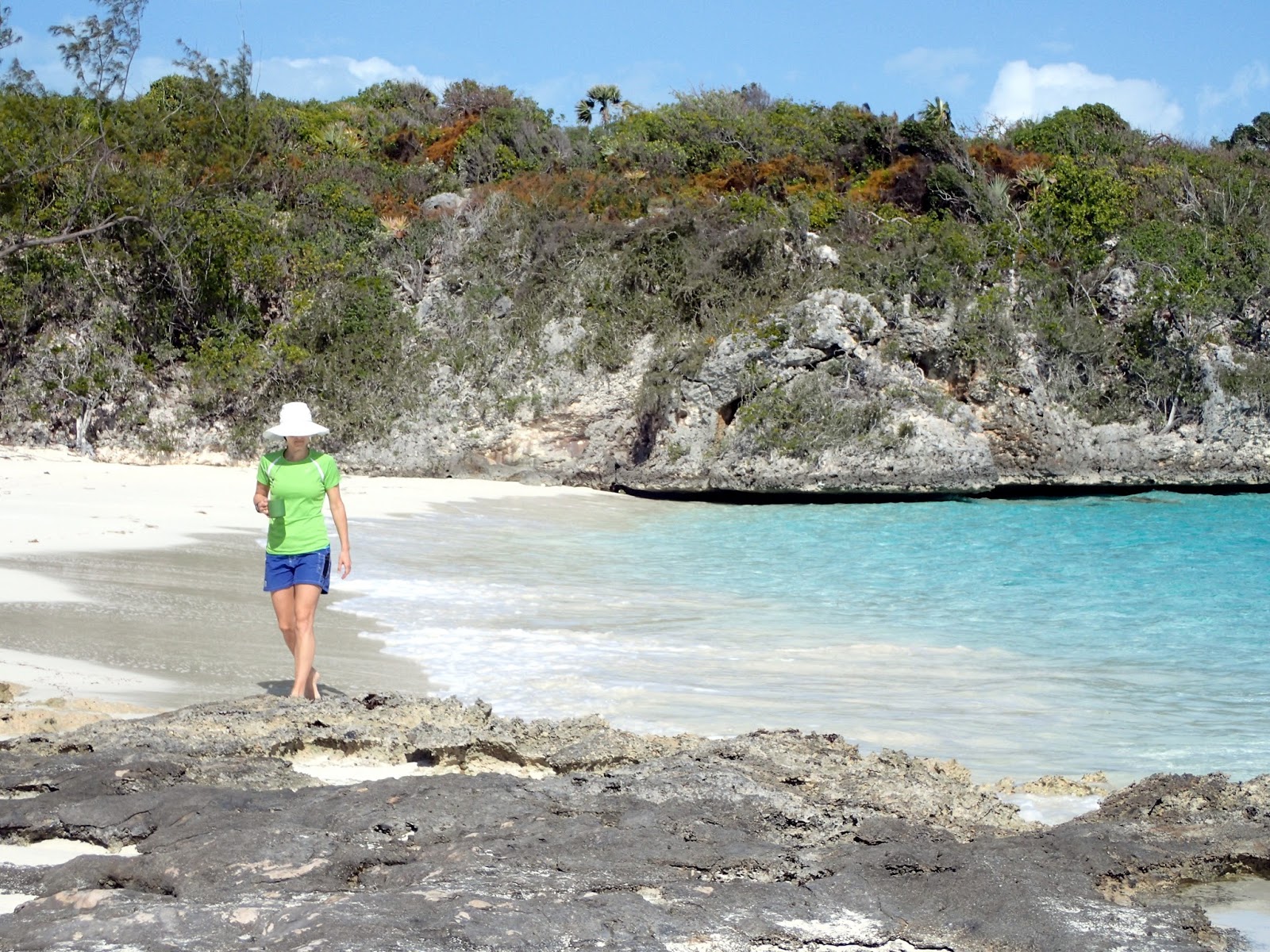 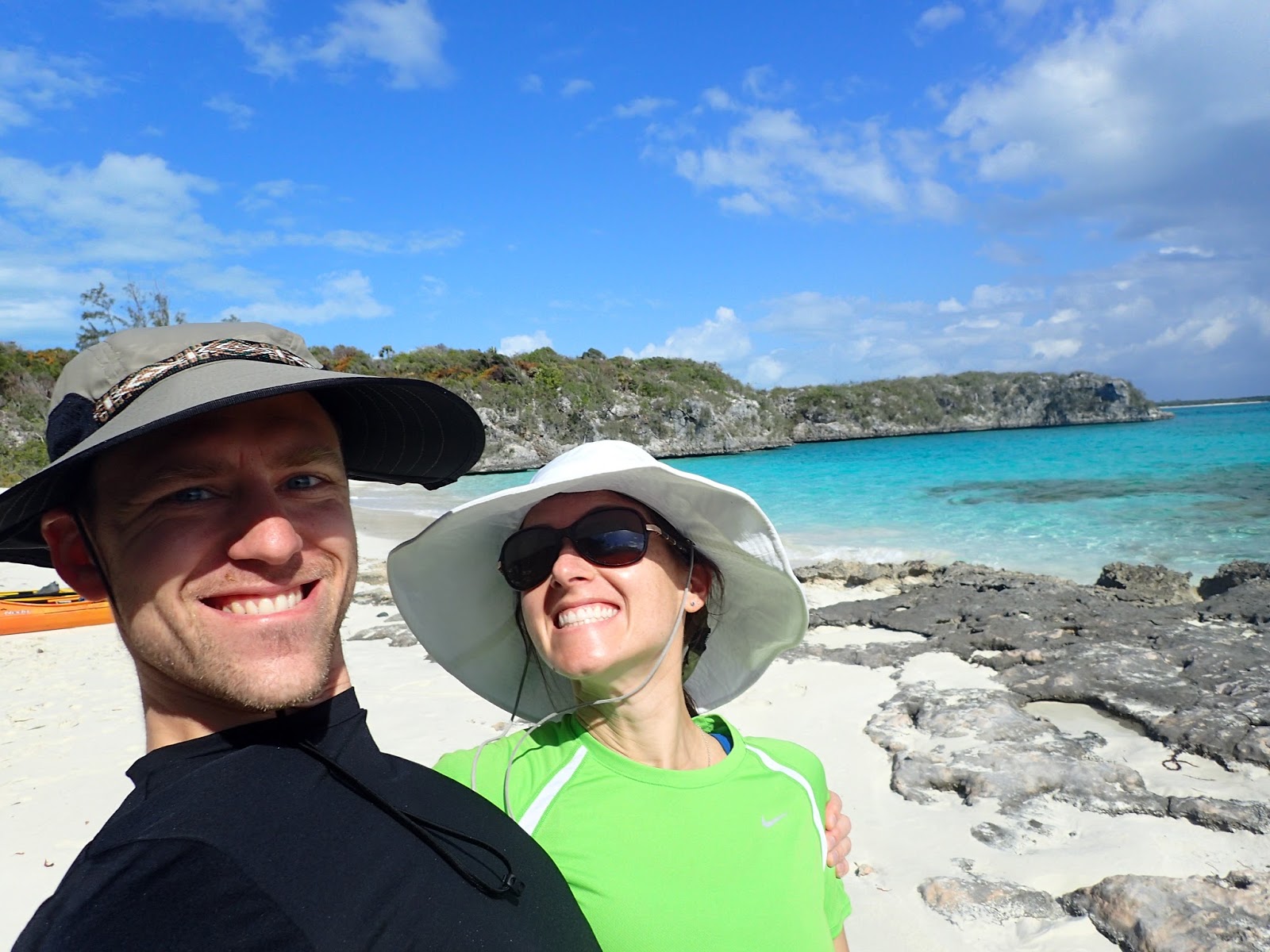 The islands we visited were uninhabited and felt very remote. The "campsites" marked on the map were simply stretches of beach that were able to accommodate a tent, nothing more. Some of them didn't even provide shade or protection from wind, but were sand rather than porous rock or dense foliage. We sought out the longer beaches and spots with shade, which sometimes meant changing our plans slightly as these features weren't always obvious on the maps. We only ever saw boats in the far distance and even these were rare. We truly felt alone out there, even though we were always relatively close to the main island. 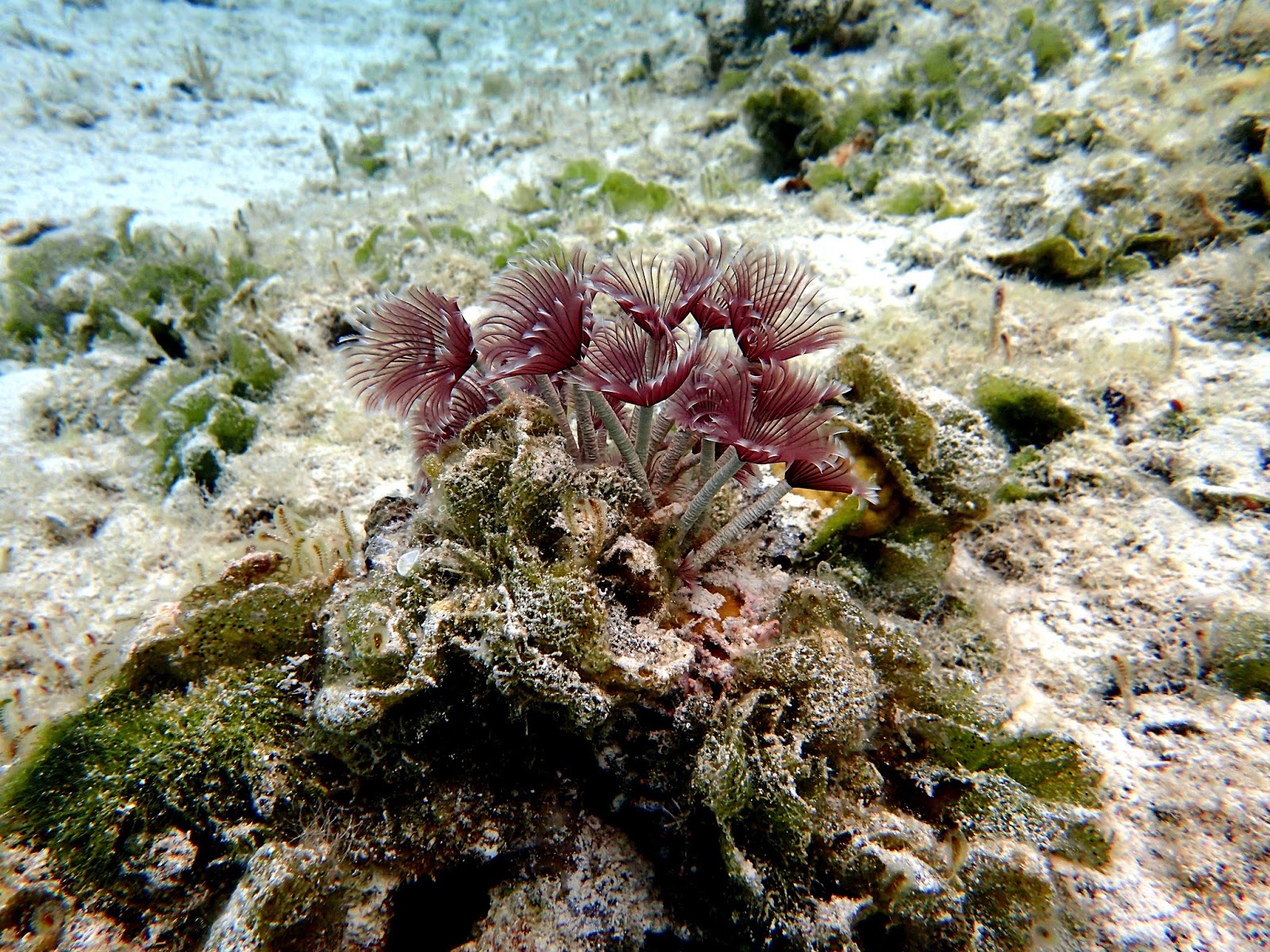 We snorkeled here for about half and hour and C got to practice firing the spear. We saw our first barracuda, which Dallas told us are sneaky, stealthy and curious, but mostly harmless. This one appeared out of nowhere and watched us for about a minute before swimming off. I took the spear to try a few shots when the B returned. At first he was still and watching, but then he started arching his body back and forth quickly and snapping his jaw. I found this threatening and started swimming (just like his prey does!) away from him toward the shore. C followed calmly behind me and the B tracked with us the whole way back and even hung around for a while after we got out of the water. I was sufficiently spooked for the day. 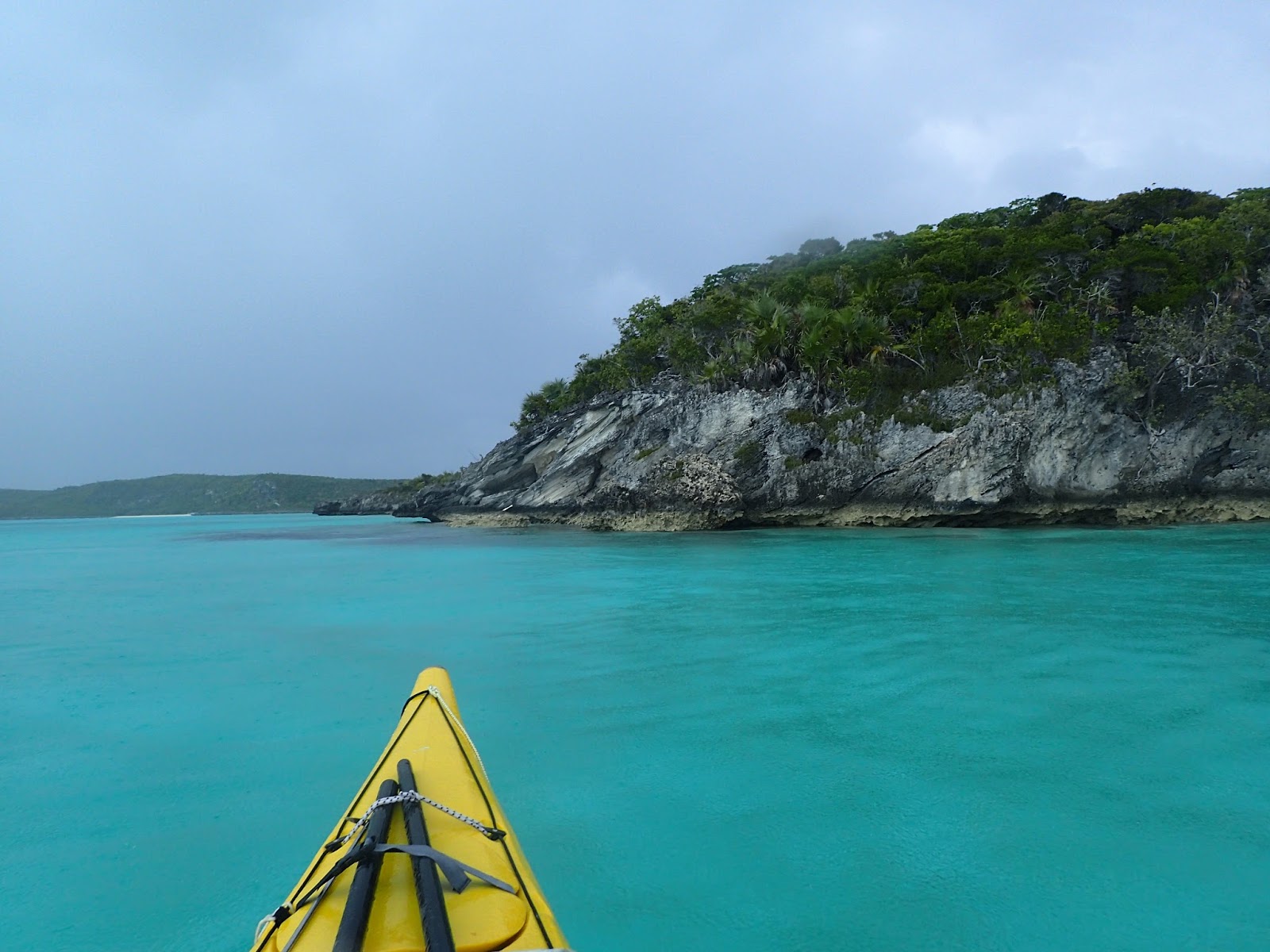 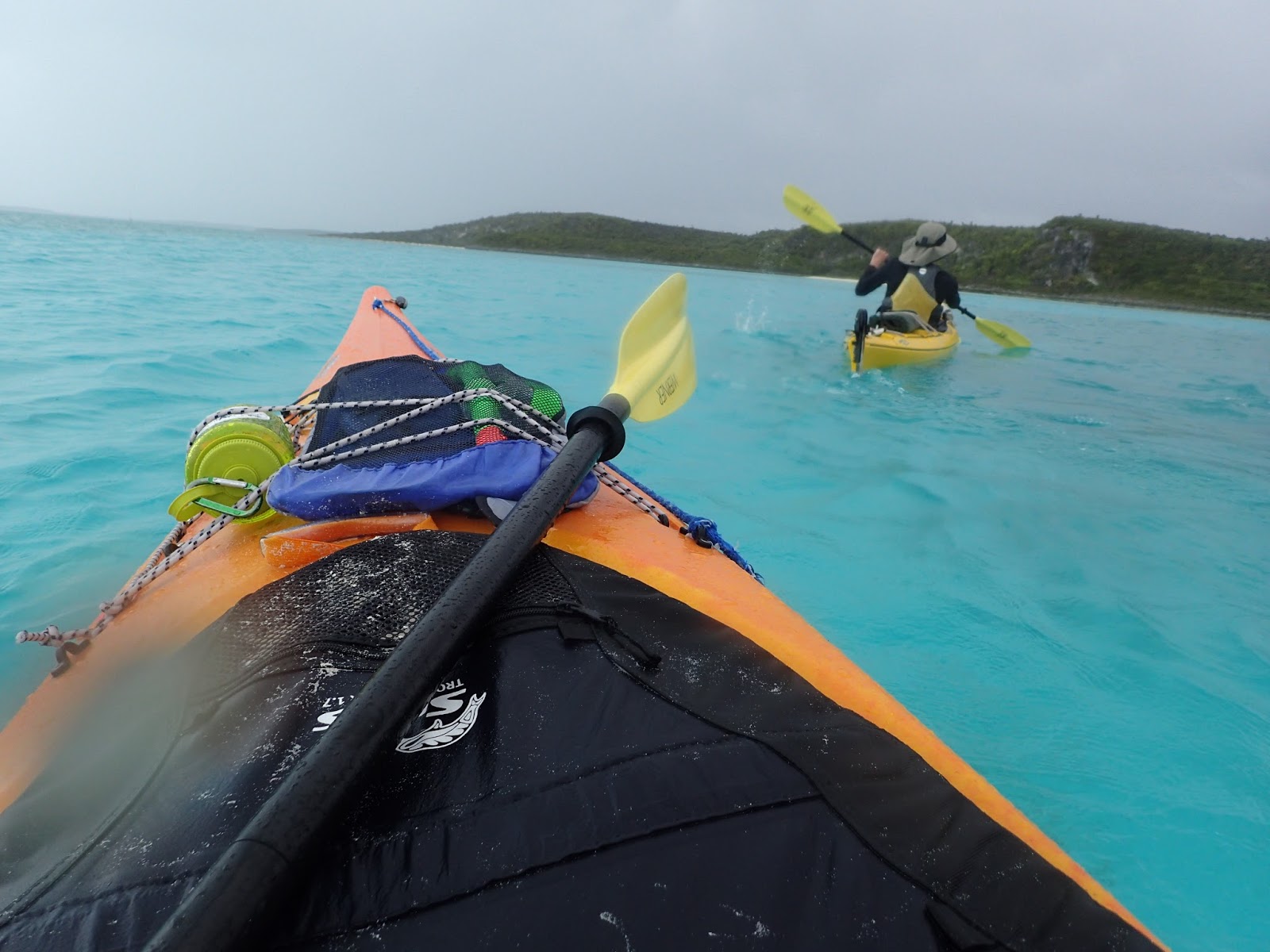 This beach was so calm and peaceful. We ate dinner, explored the island a bit, and read by a fire into the evening.

{Brief photo lapse due to camera malfunction} On the way to our next destination the cable port door on our camera popped open when it was submerged, short circuiting the screen display and a few other mechanisms. It turned out the camera was still able to take pictures but it took some time and some drying until we figured that out.


Upon arriving at Norman's Pond Cay we were greeted by two huge iguanas who kept us entertained for a good hour. 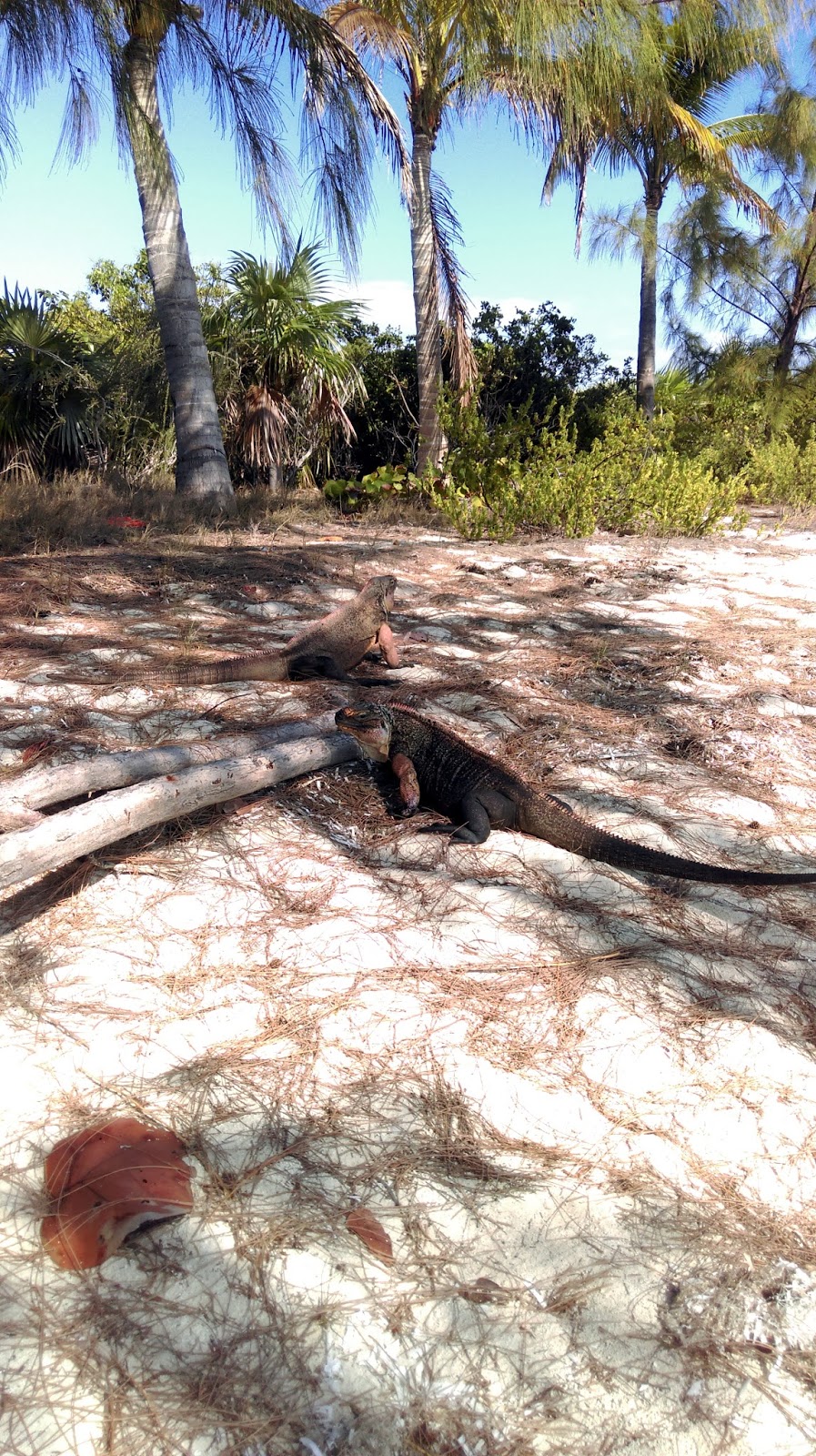 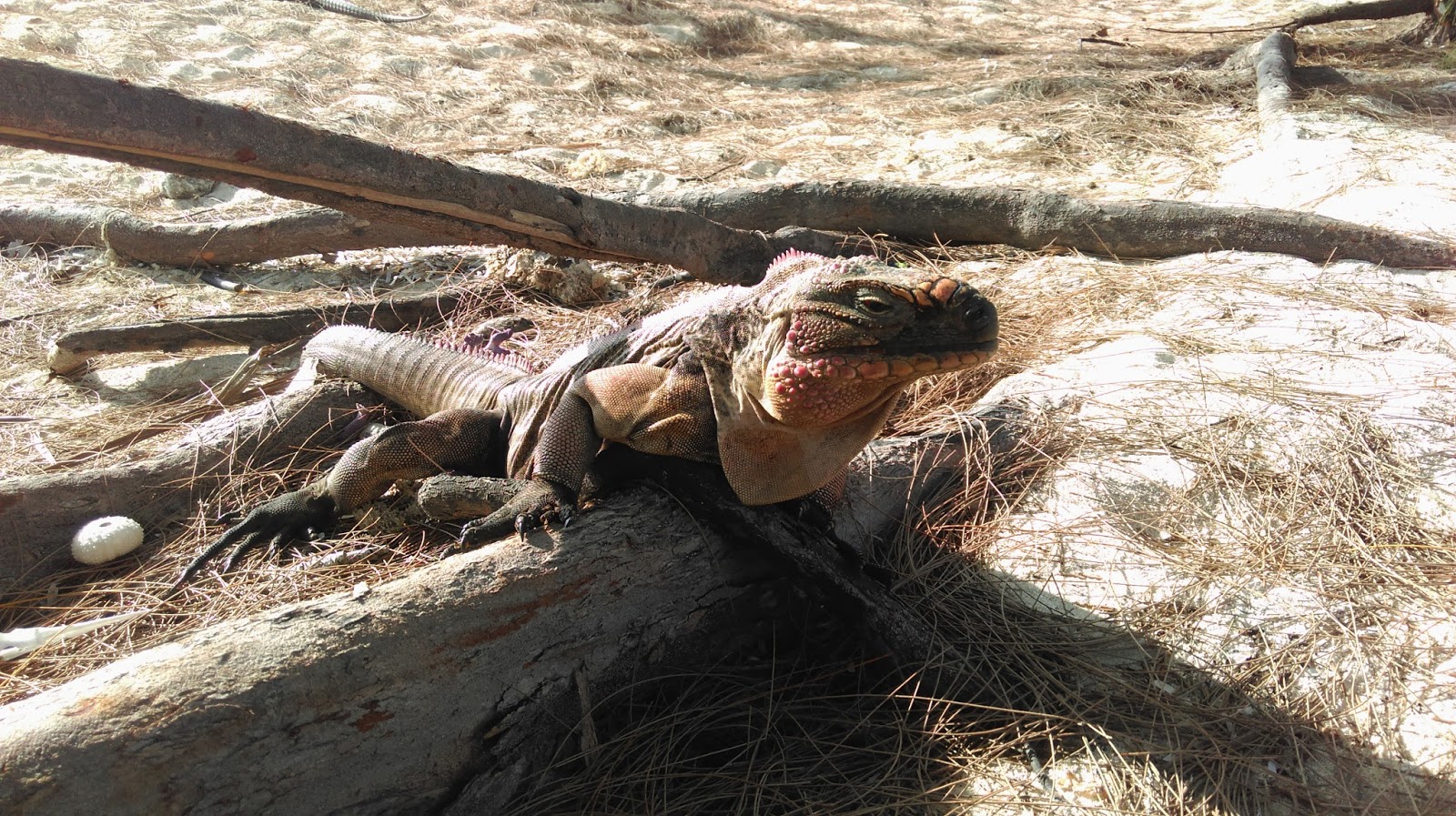 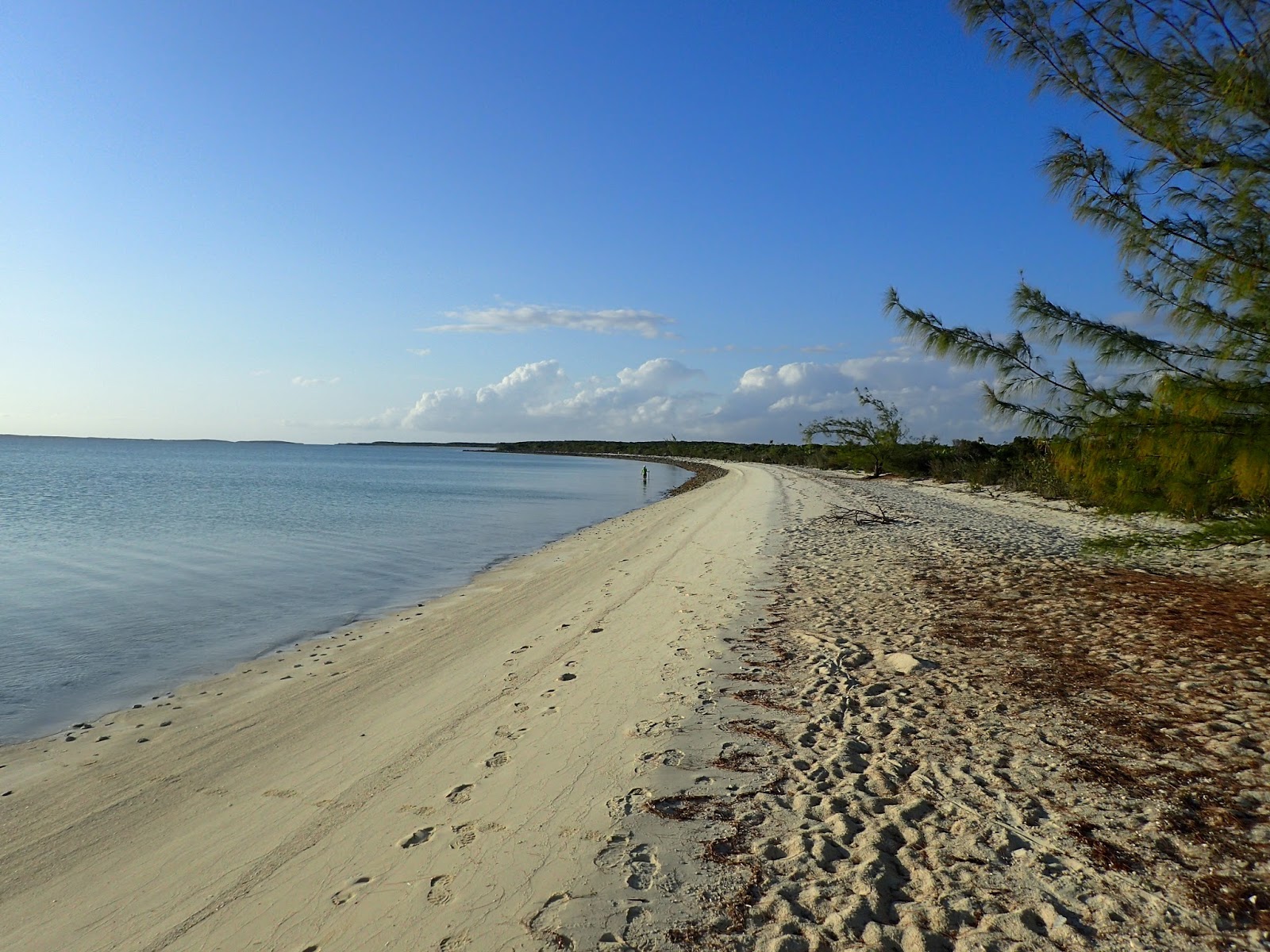 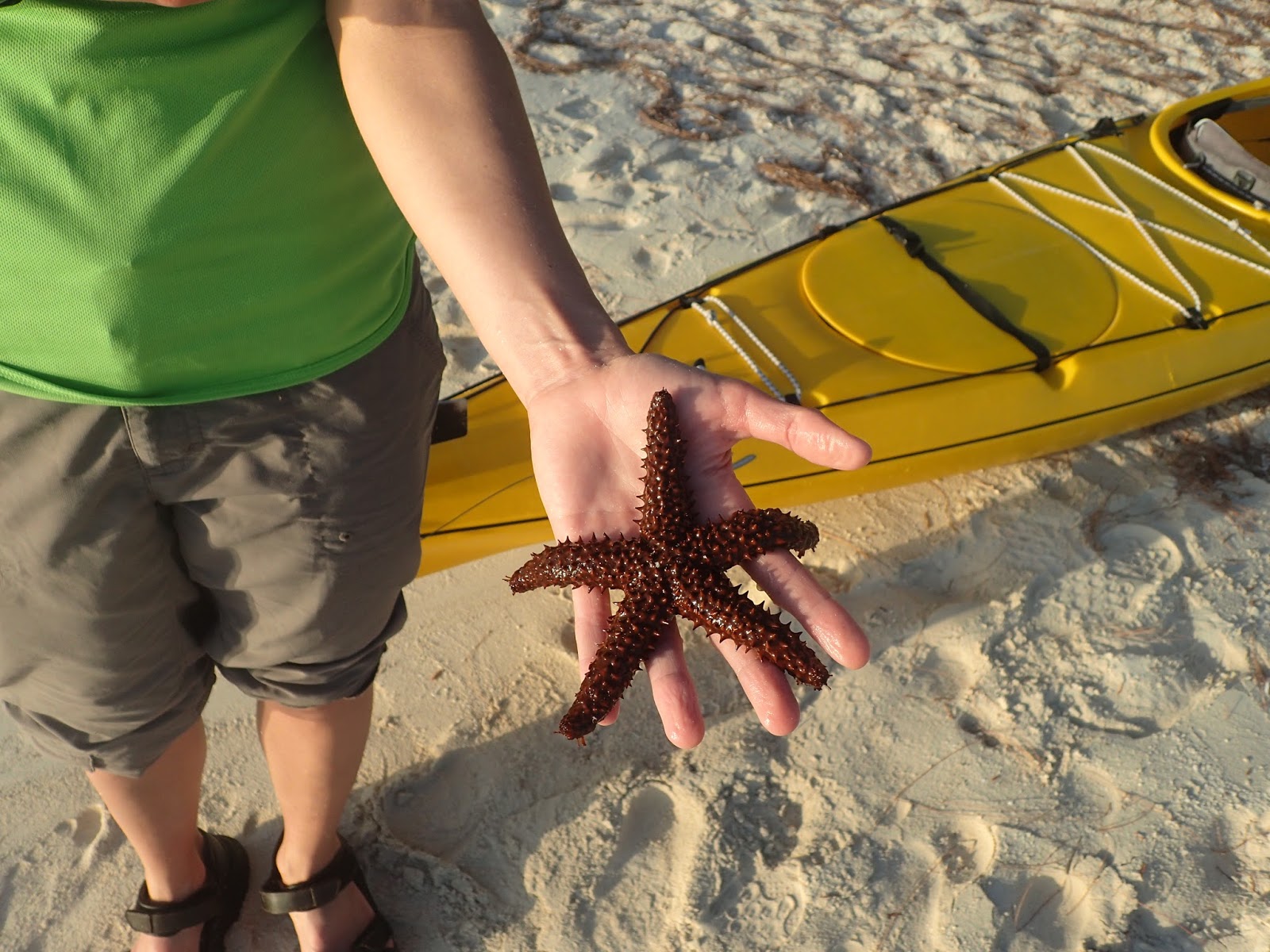 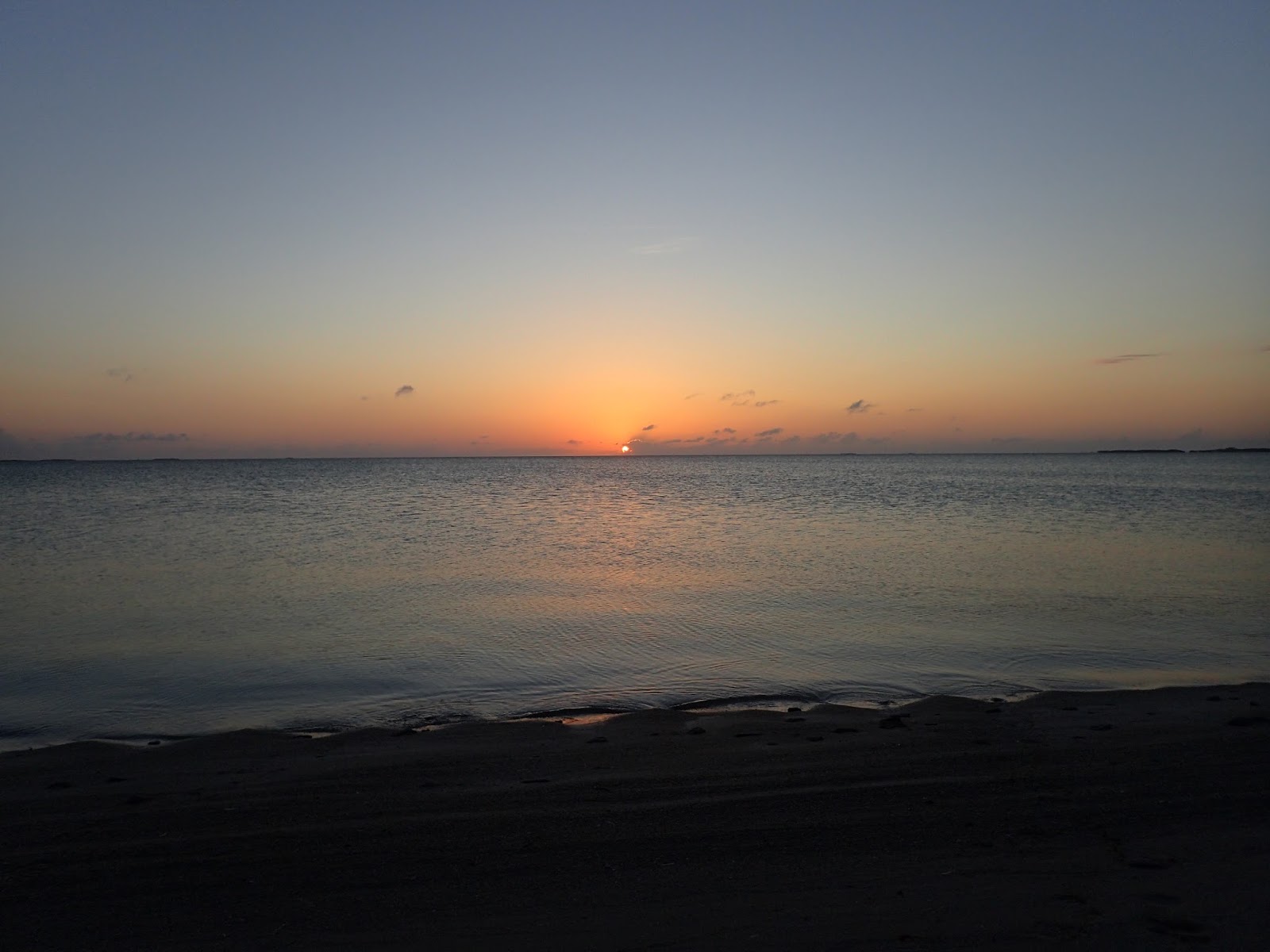 The long, straight shoreline and low landscape on this beach made for unimpeded views of the sunset and set the stage for some incredible stargazing. Our first night the stars flooded the sky, nearly stretching to the horizon. Once it got dark enough we also noticed some sparkling in the water and assumed it was a reflection until we realized it was bioluminescence! As each ripple rolled onto the shore the water glistened briefly and seemed to be mirroring the sky. We were able to expose more light by drawing sweeping lines in the wet sand. It was incredible. We spent a lot of time on the beach that night. 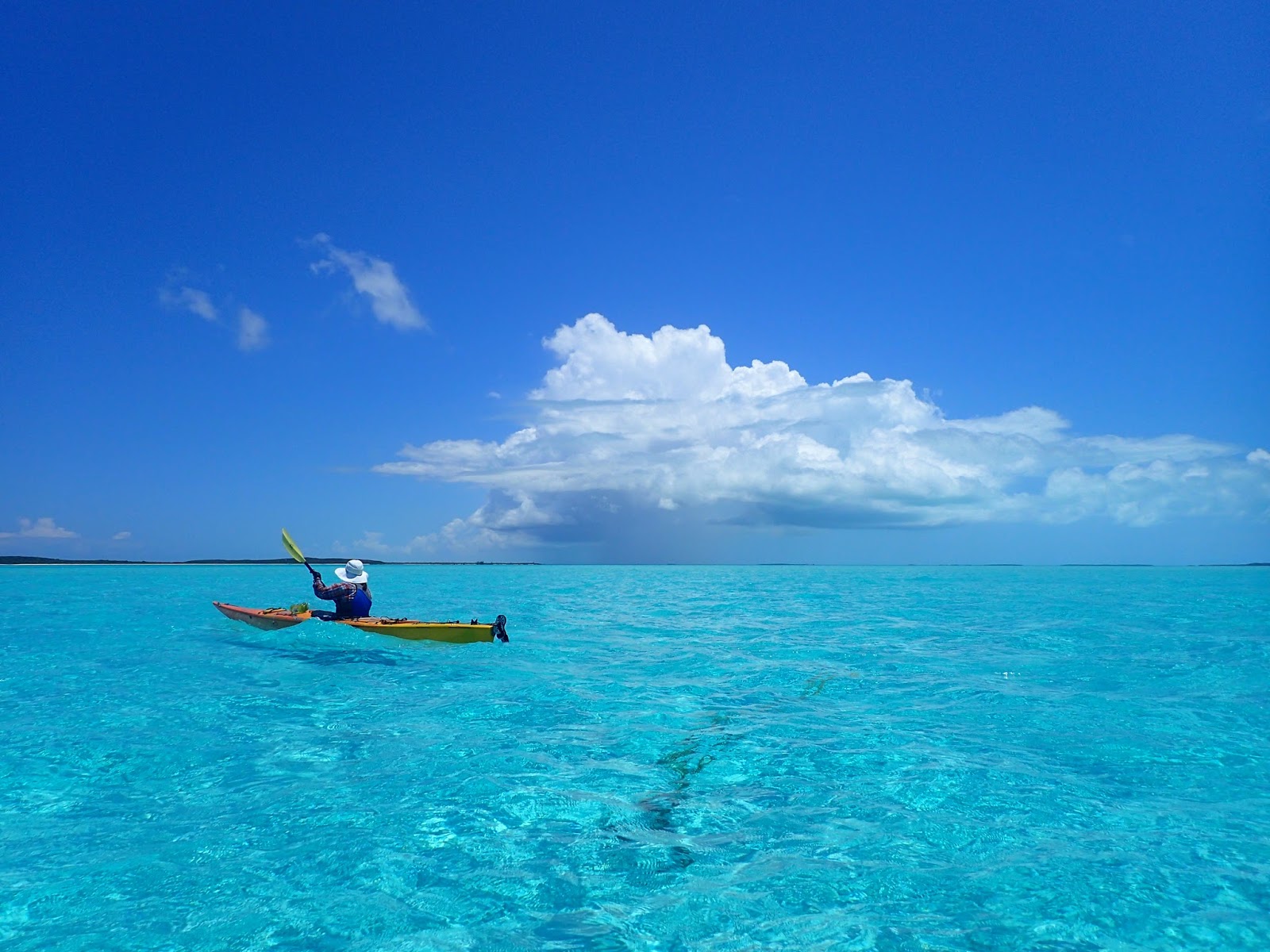 We ate and rested for a bit after our long day and then headed for a snorkel off the Southern tip of the cay. C was interested in going to some deeper water so we brought both kayaks and he tied to mine before diving down. After about 20 minutes of exploring he popped up, held onto my boat and told me to paddle into shore. Once we got there he told me he had gotten spooked when he looked up and saw 10-15 barracuda surrounding him. Damn those creepy fish!

The next morning we paddled straight off the shore of Norman's Pond Cay for two hours and arrived at this beach on New Cay. 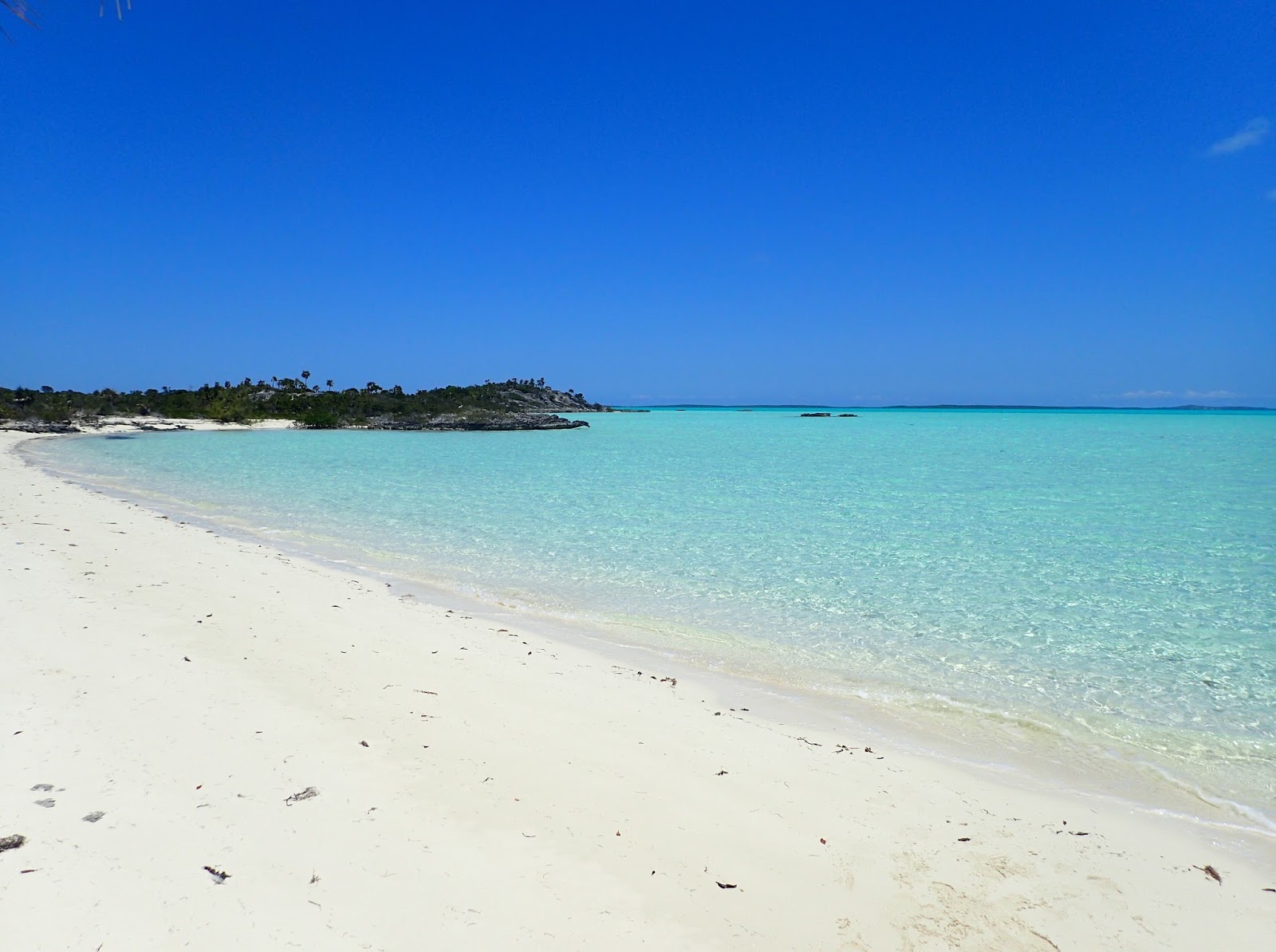 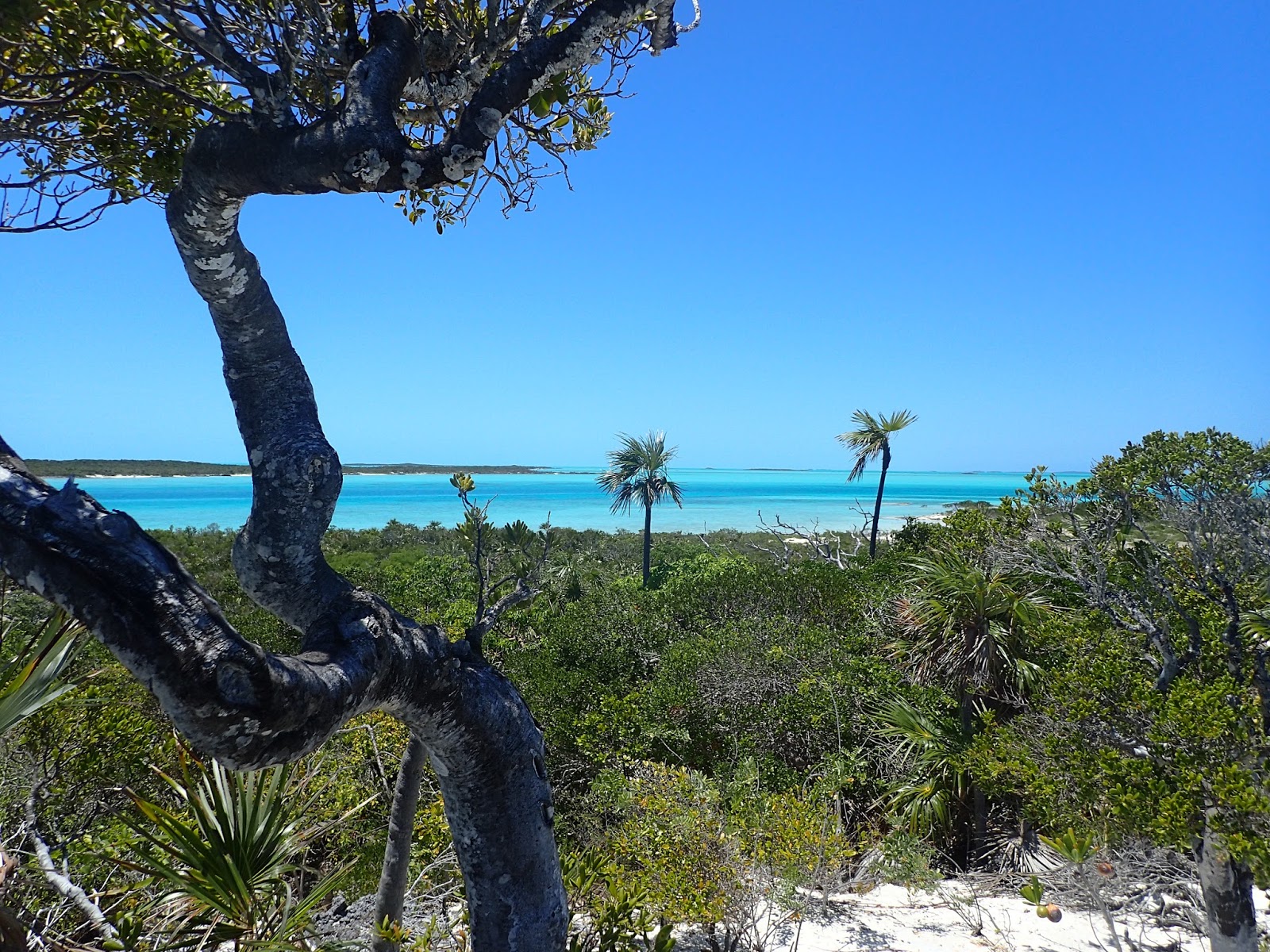 After lunch in the shade and a walk to the highest point on the island we paddled around to the NW tip to snorkel in a protected cove. It was here that we spotted a huge ray from the shore. Sadly, we didn't get a closer encounter under water. 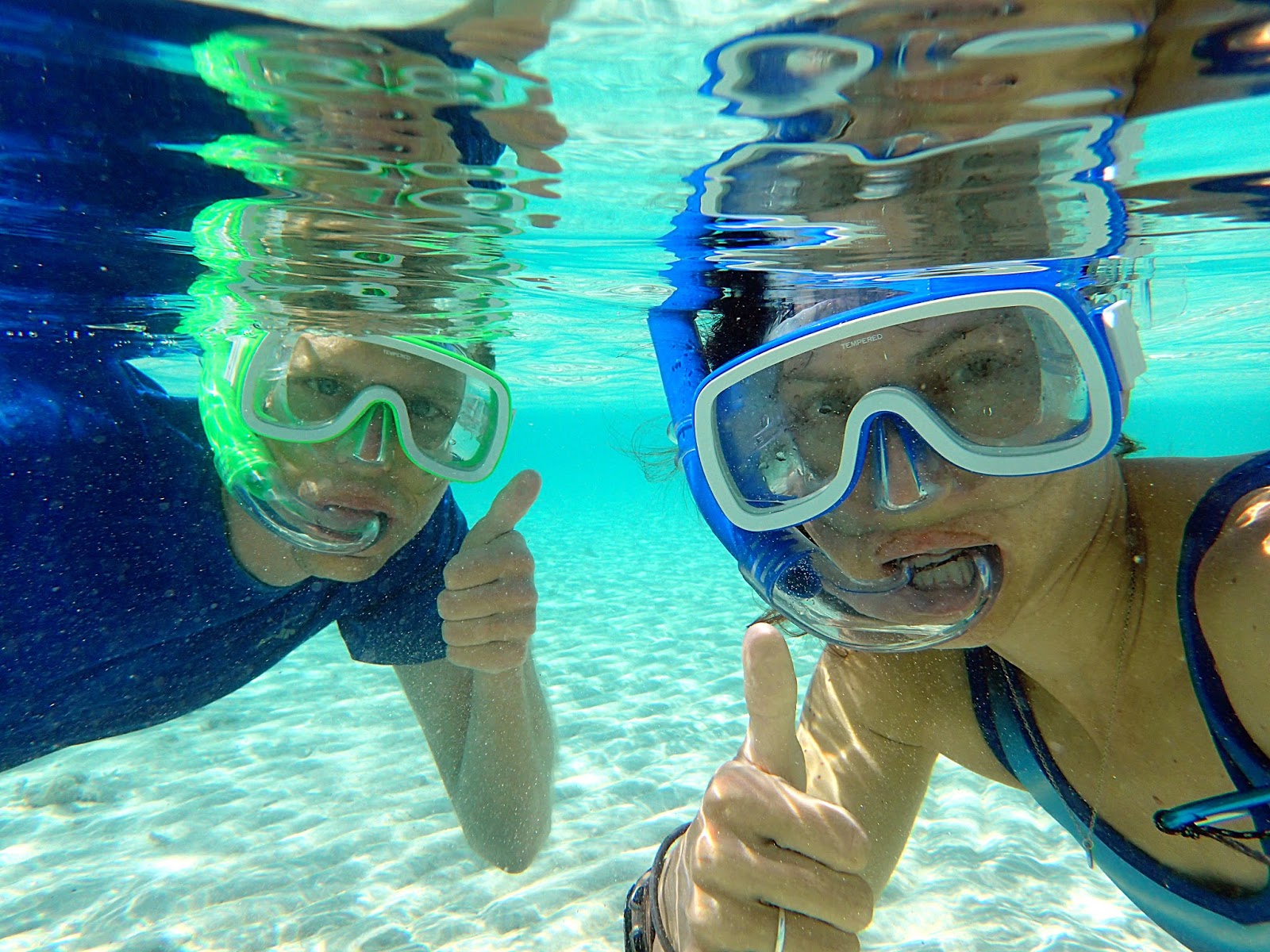 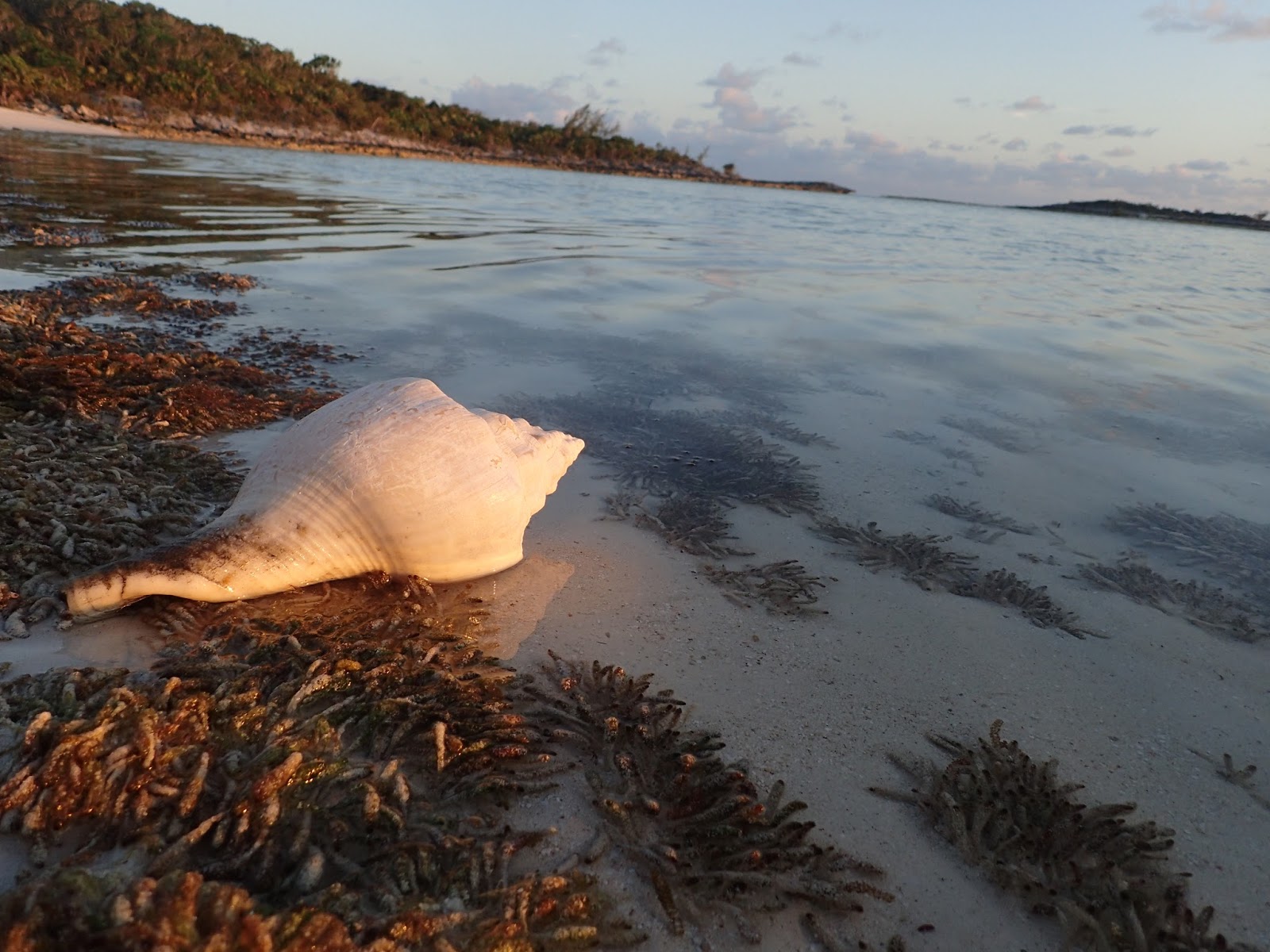 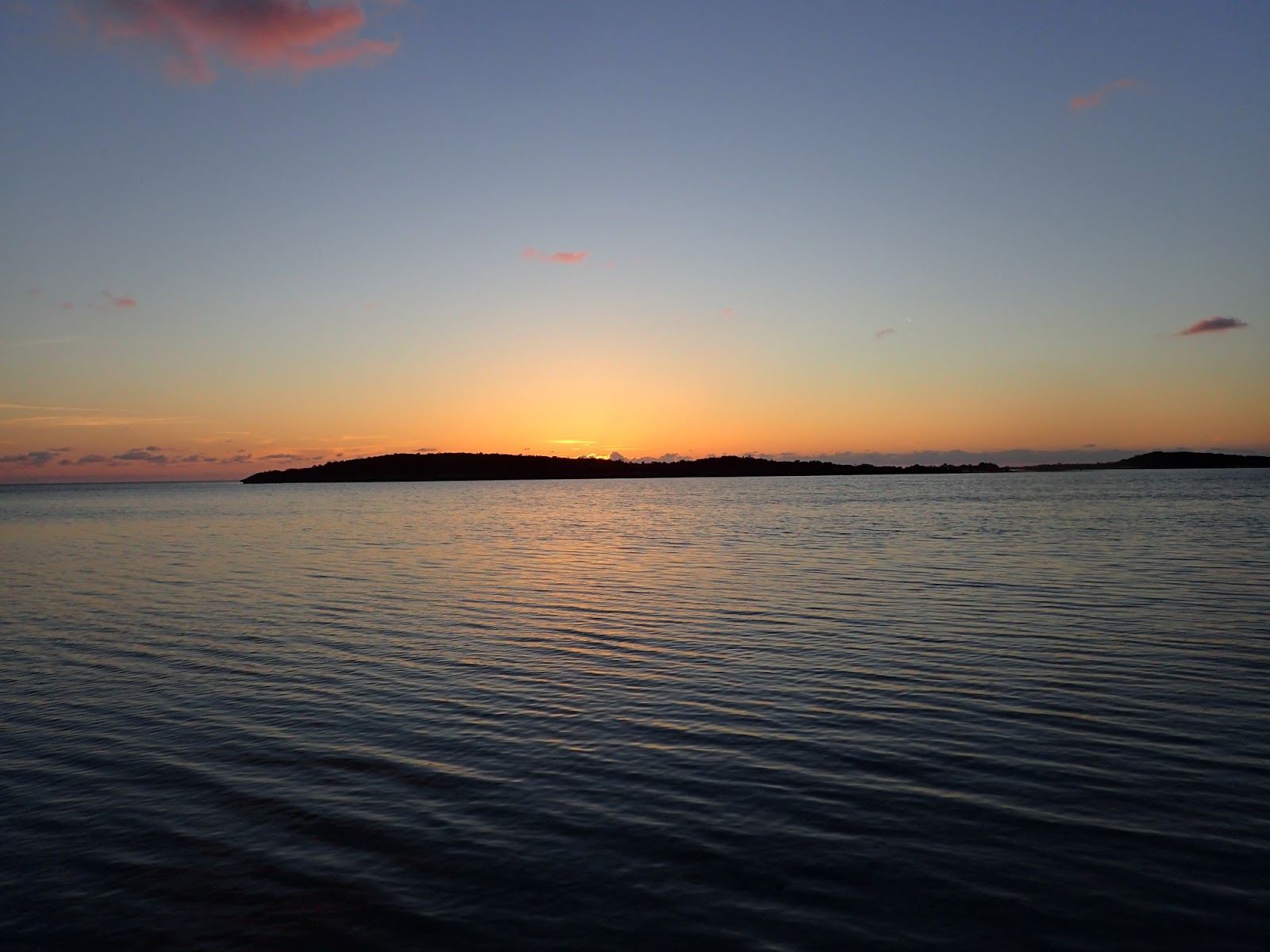 The next morning we continued following the shorelines of the cays and crossing the channels between them. We saw lots of overhanging rocks (like the one below) with coral communities hiding in their shadows. We stopped to snorkel off Brigantine Cay and I saw a small grey shark when I first went under. It seemed totally uninterested in us, which quelled my fears and we dove on. We ended up seeing lots of different colorful fish at this reef and I caught my first glimpse of a sea turtle! (Unfortunately our pictures don't do it justice...) 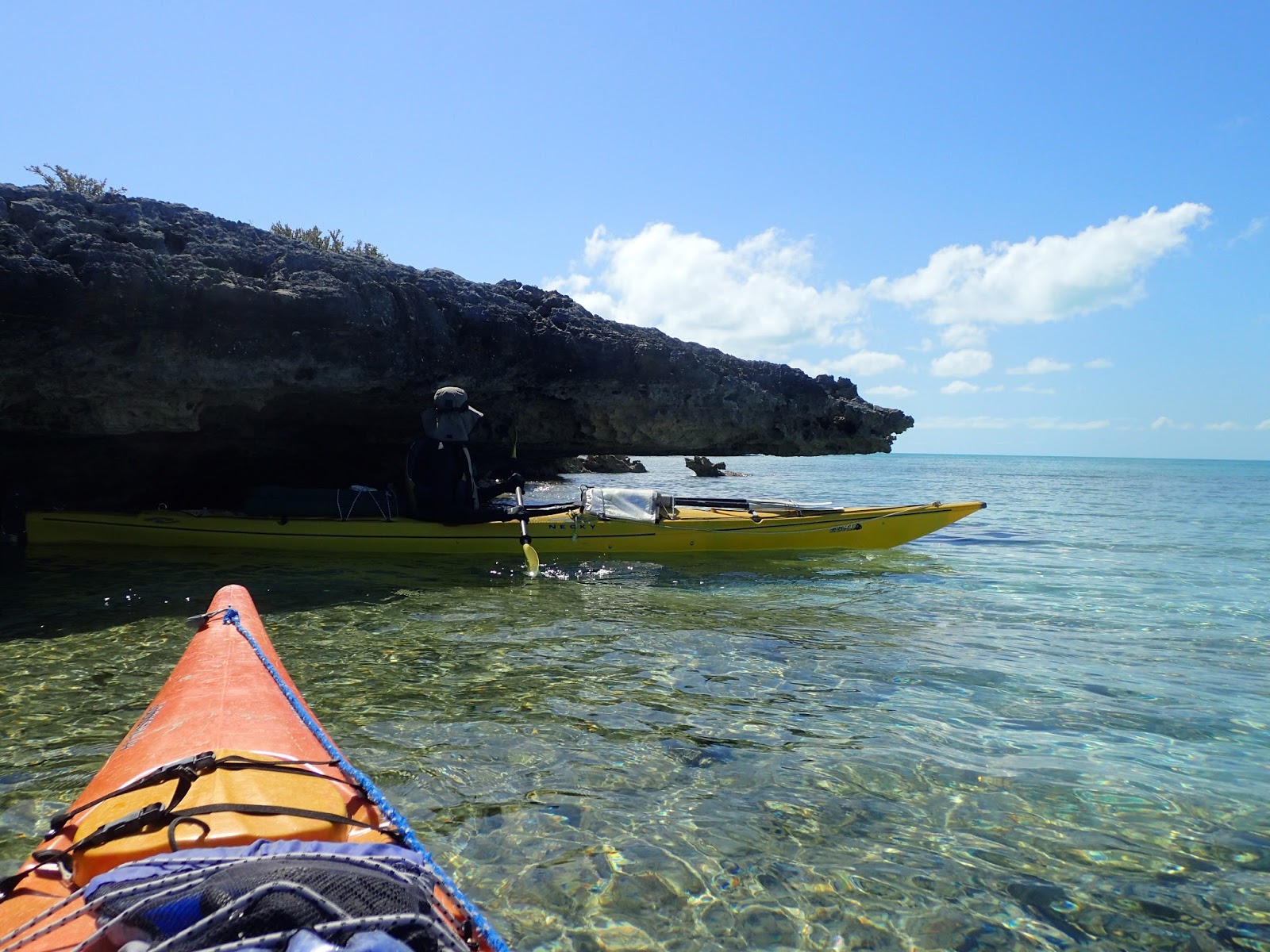 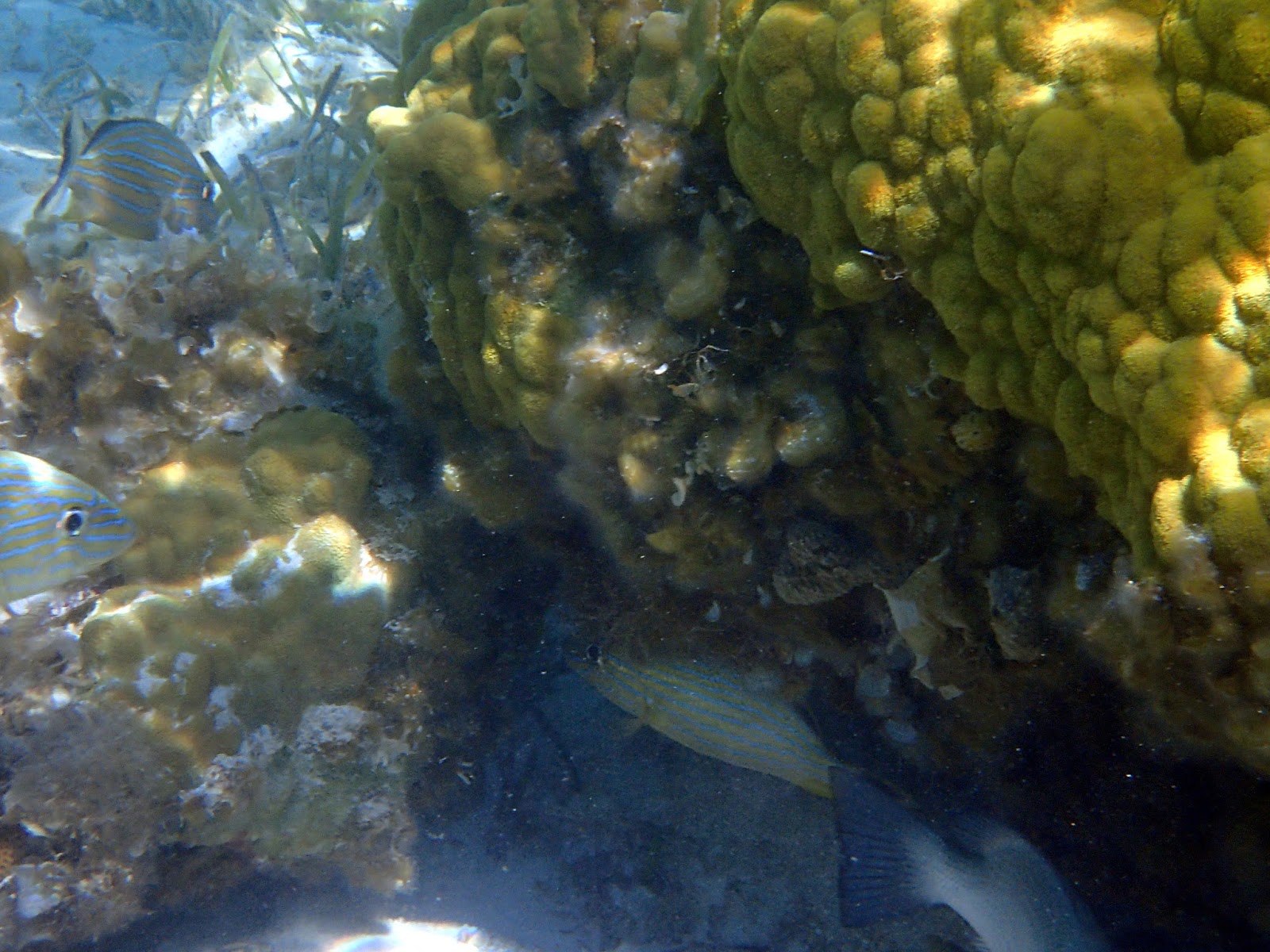 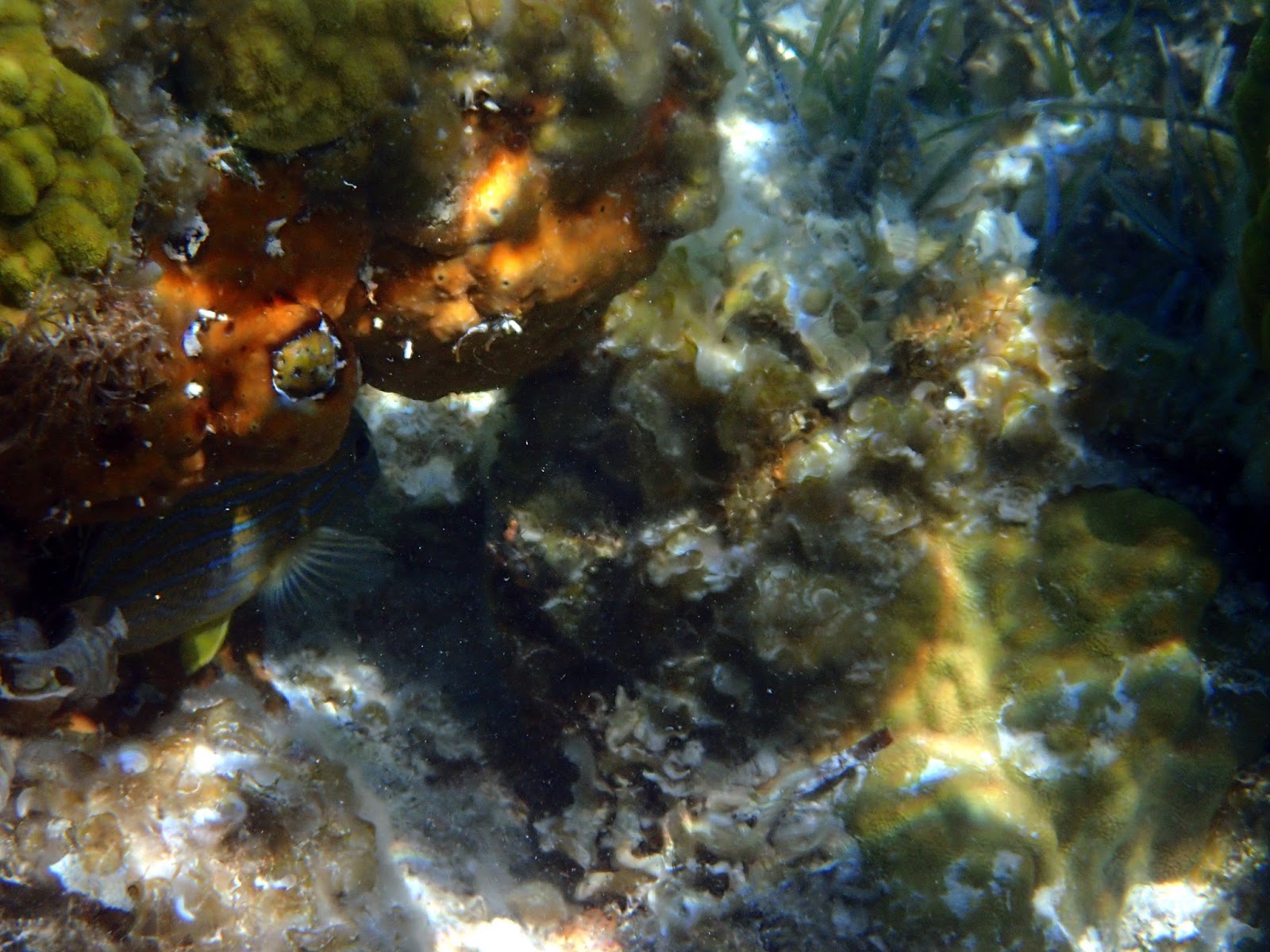 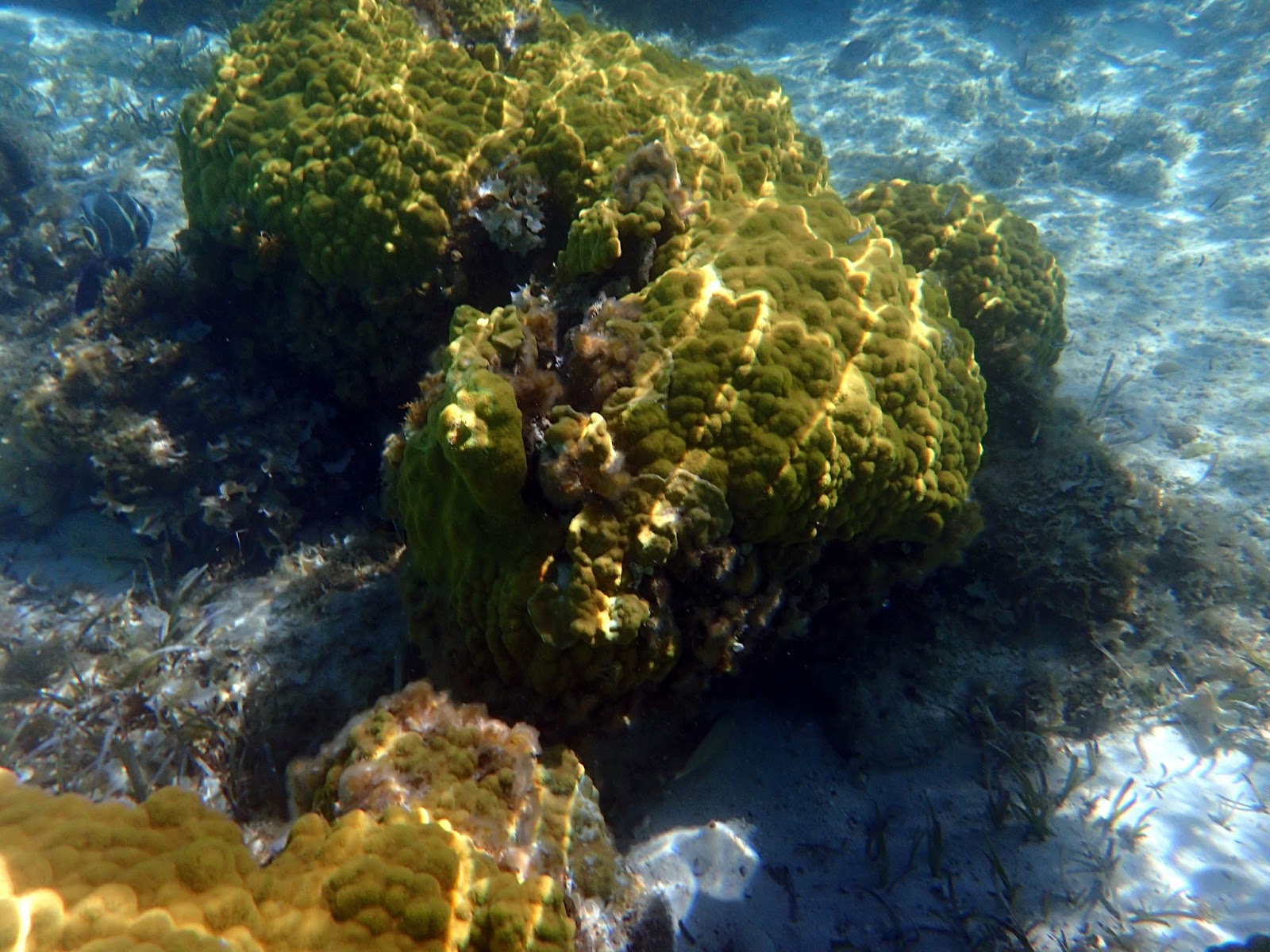 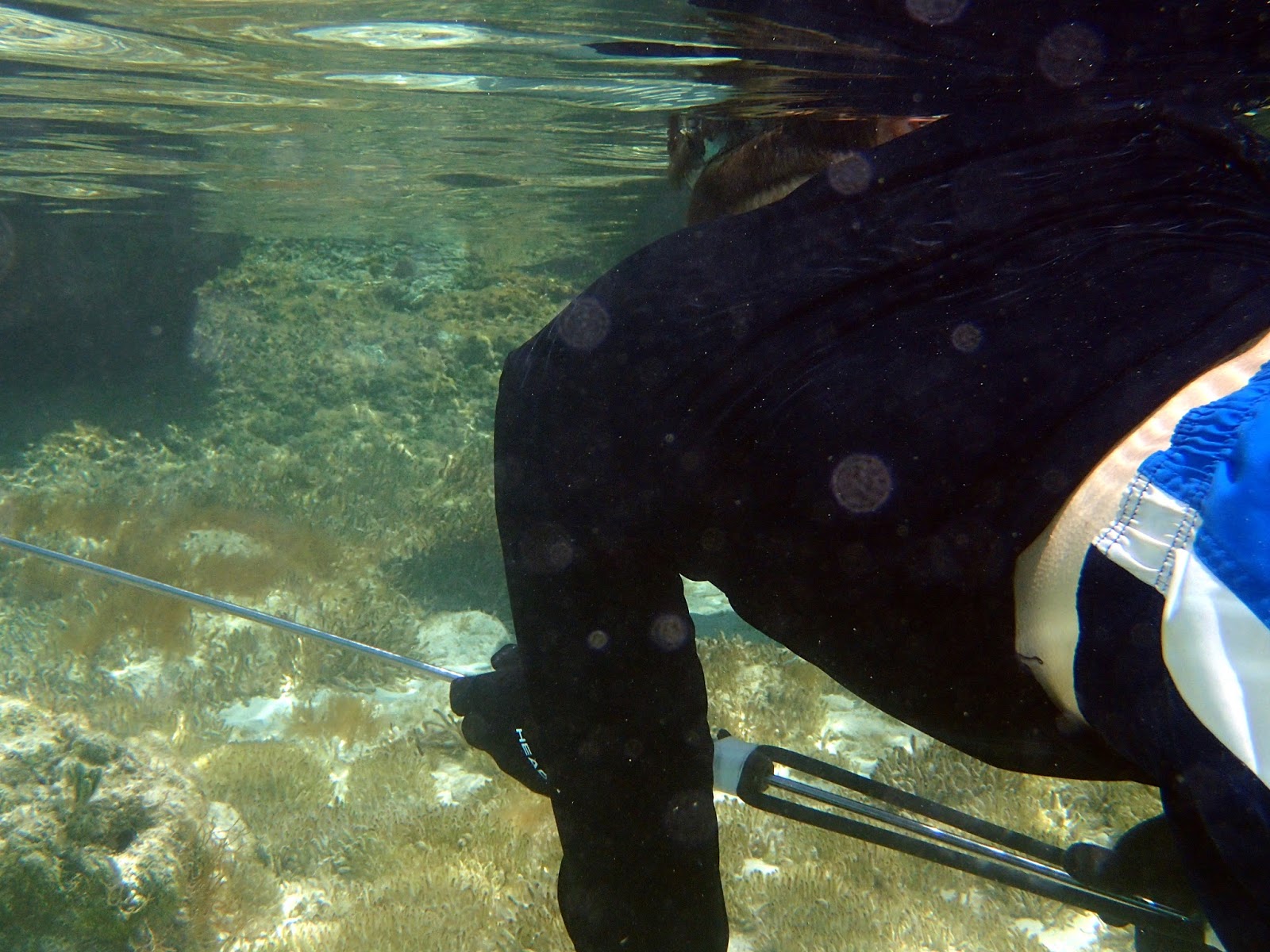 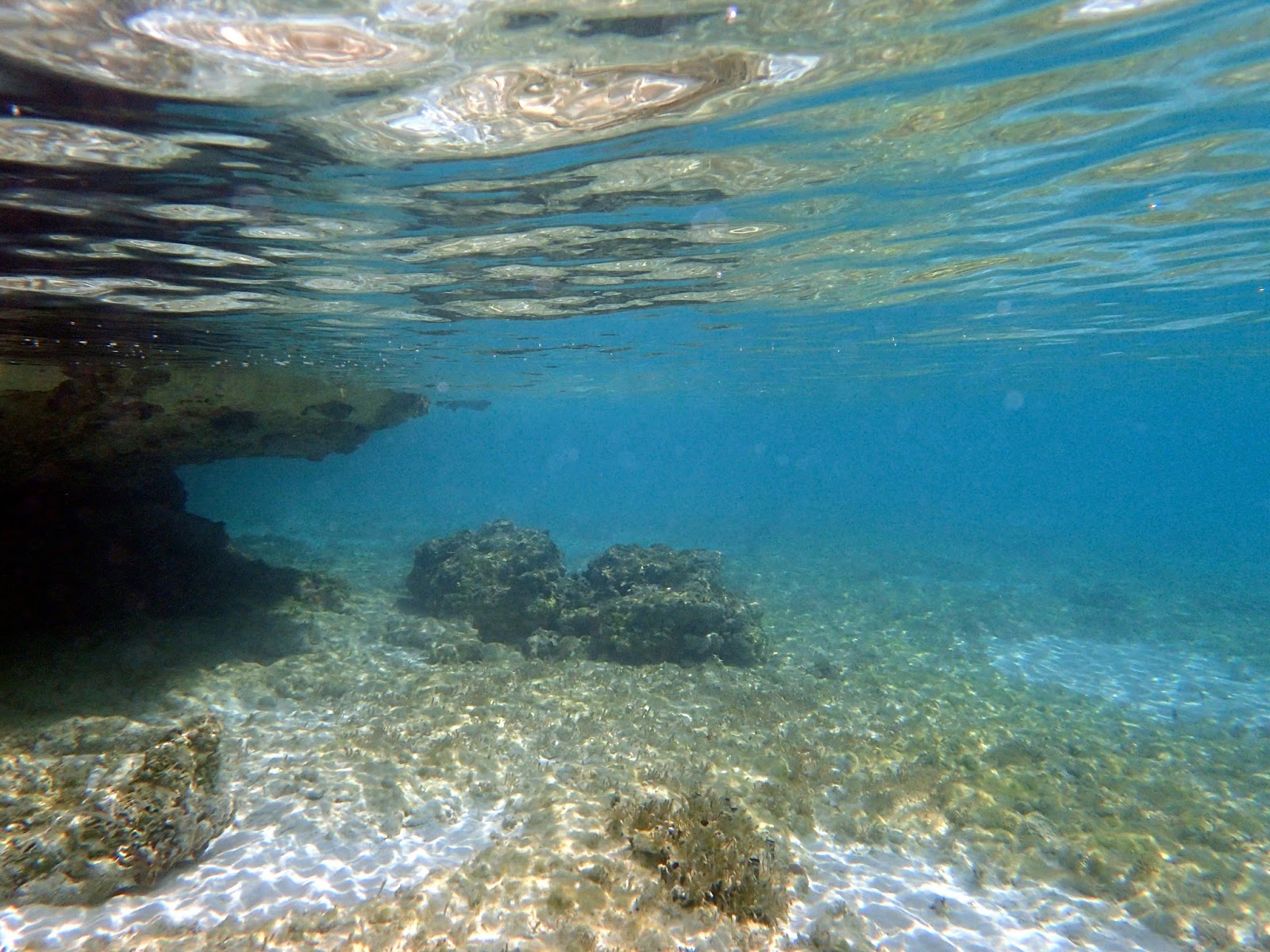 
We pressed on to Lily Cay where we would make our last campsite. We saw another sea turtle as we scoped out the shore for a place to put our tent and were greeted on land by another iguana. The beach was so narrow here that we put markers in the sand and set our alarms to wake up before high tide to gauge whether we were in danger of flooding the tent. Thankfully we didn't have to relocate in the middle of the night, but the water rose to within two feet of our front door! 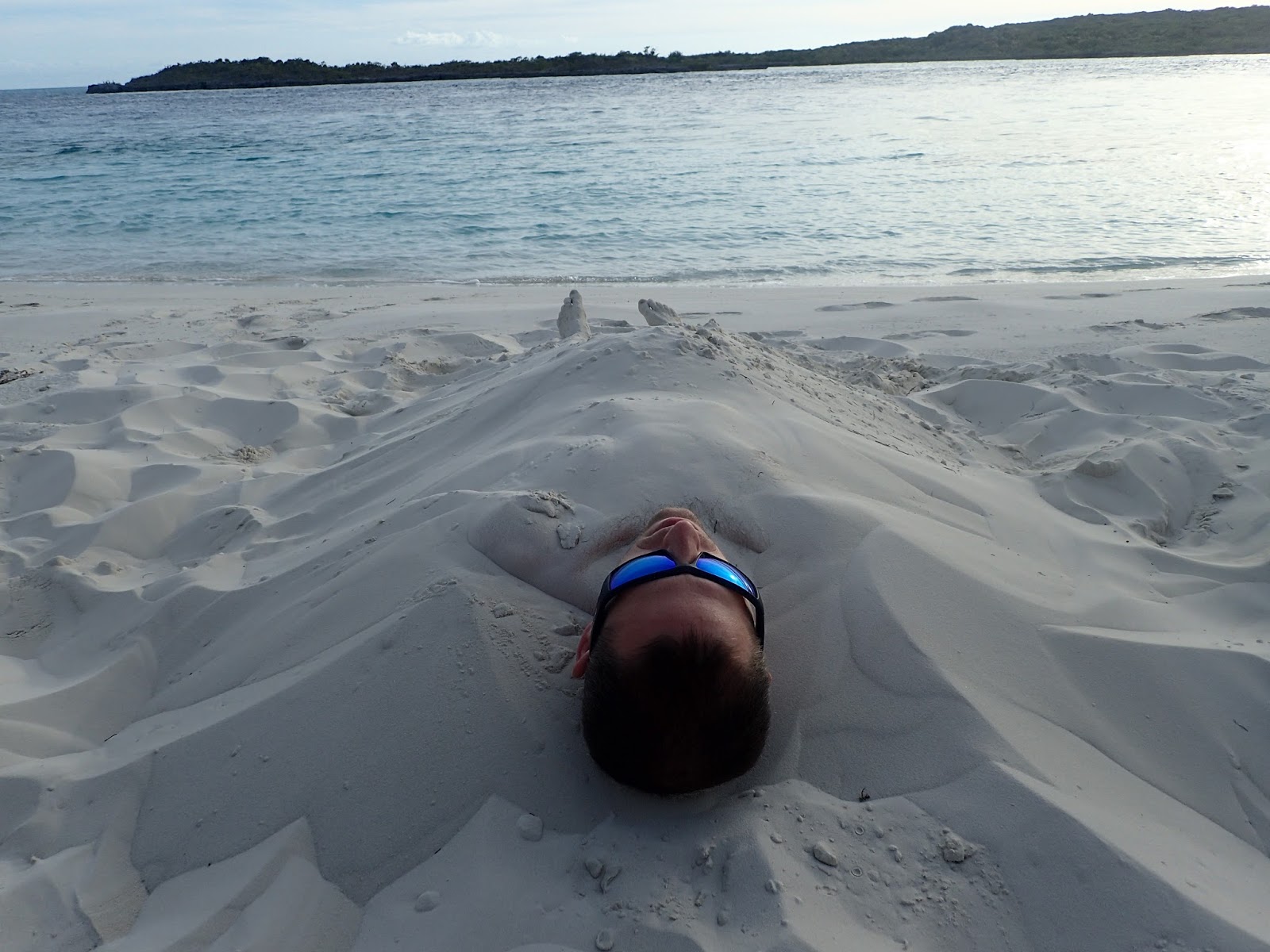 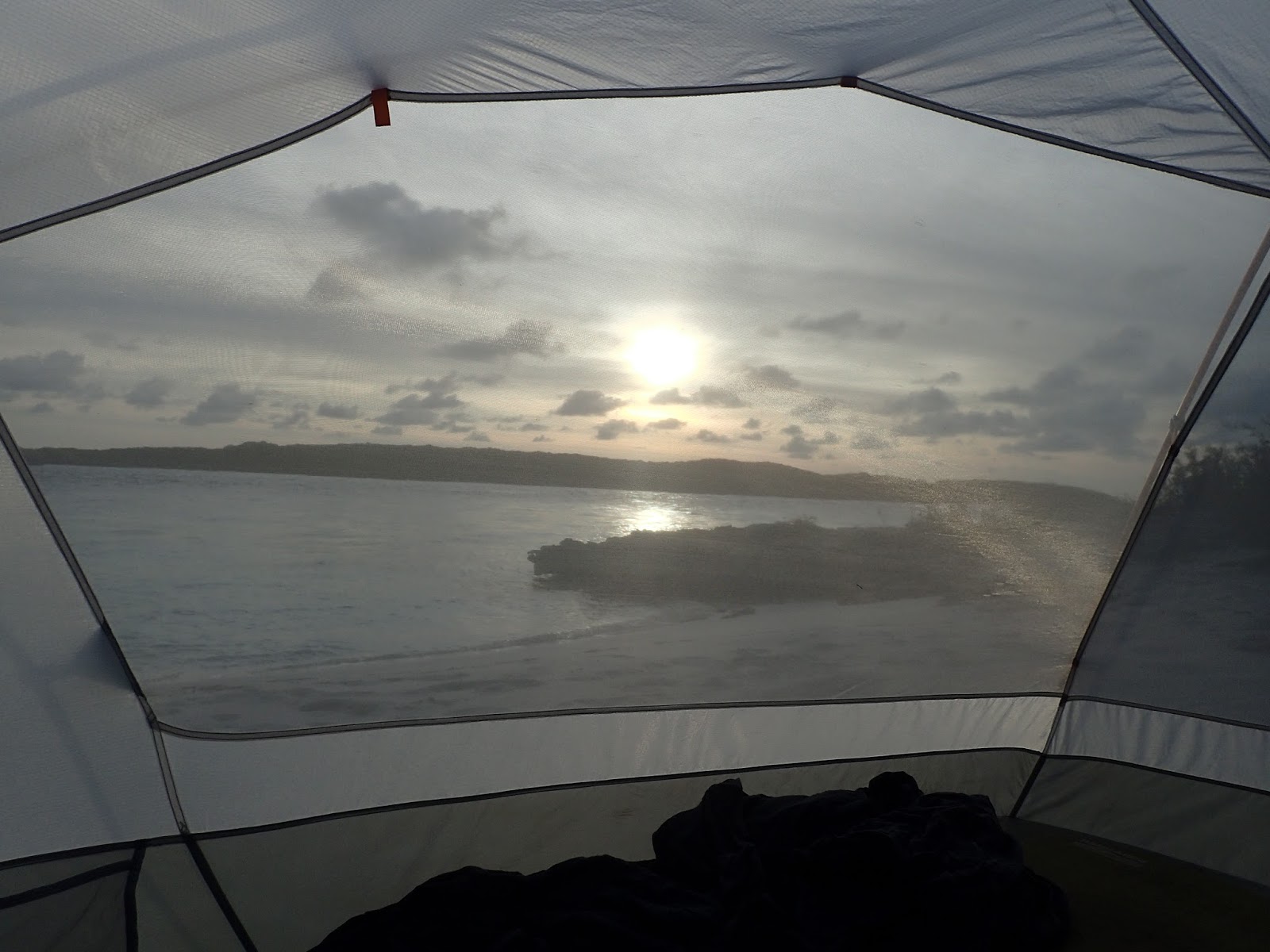 Our last morning we had to make the long paddle back to Great Exuma to meet Dallas at the pick up spot by noon. We judged the distance and estimated how long it would take us based on our previous days' travel times. Our estimate was wrong. The distance was manageable, but the strong current and headwind made us much slower than anticipated. It was pretty awful. Awful because it was physically hard, for one, but worse because we were making such slow progress and were going to be late. This stressed me out - I didn't want to make Dallas wait, and we had a flight to catch.

Before things got too bad, though, we stopped to stretch our legs and backs at this island with a huge abandoned property. We guessed the occupant was an orthopedic surgeon based on all the journals left behind. The whole place was taken over by iguanas, inside and out. 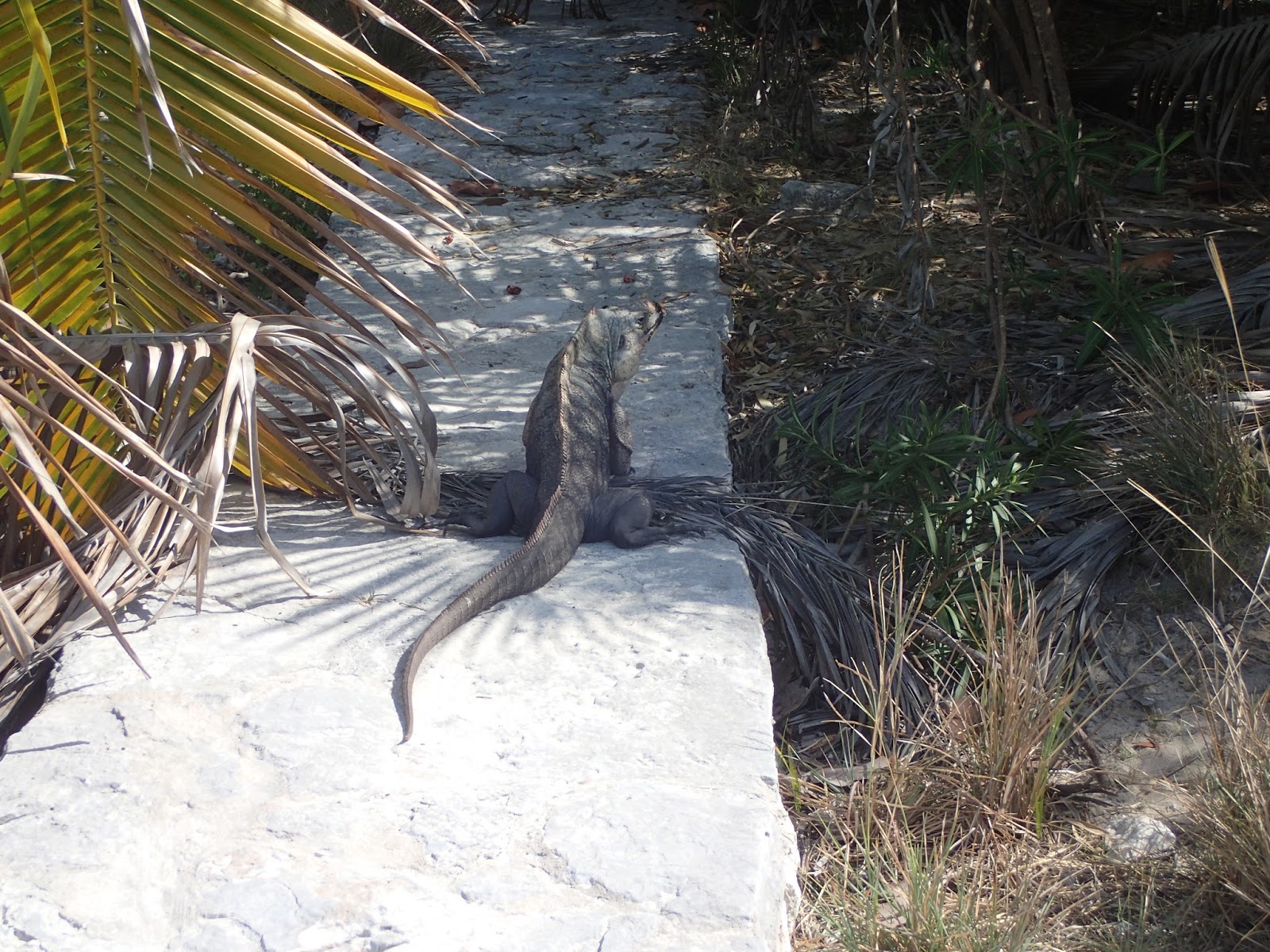 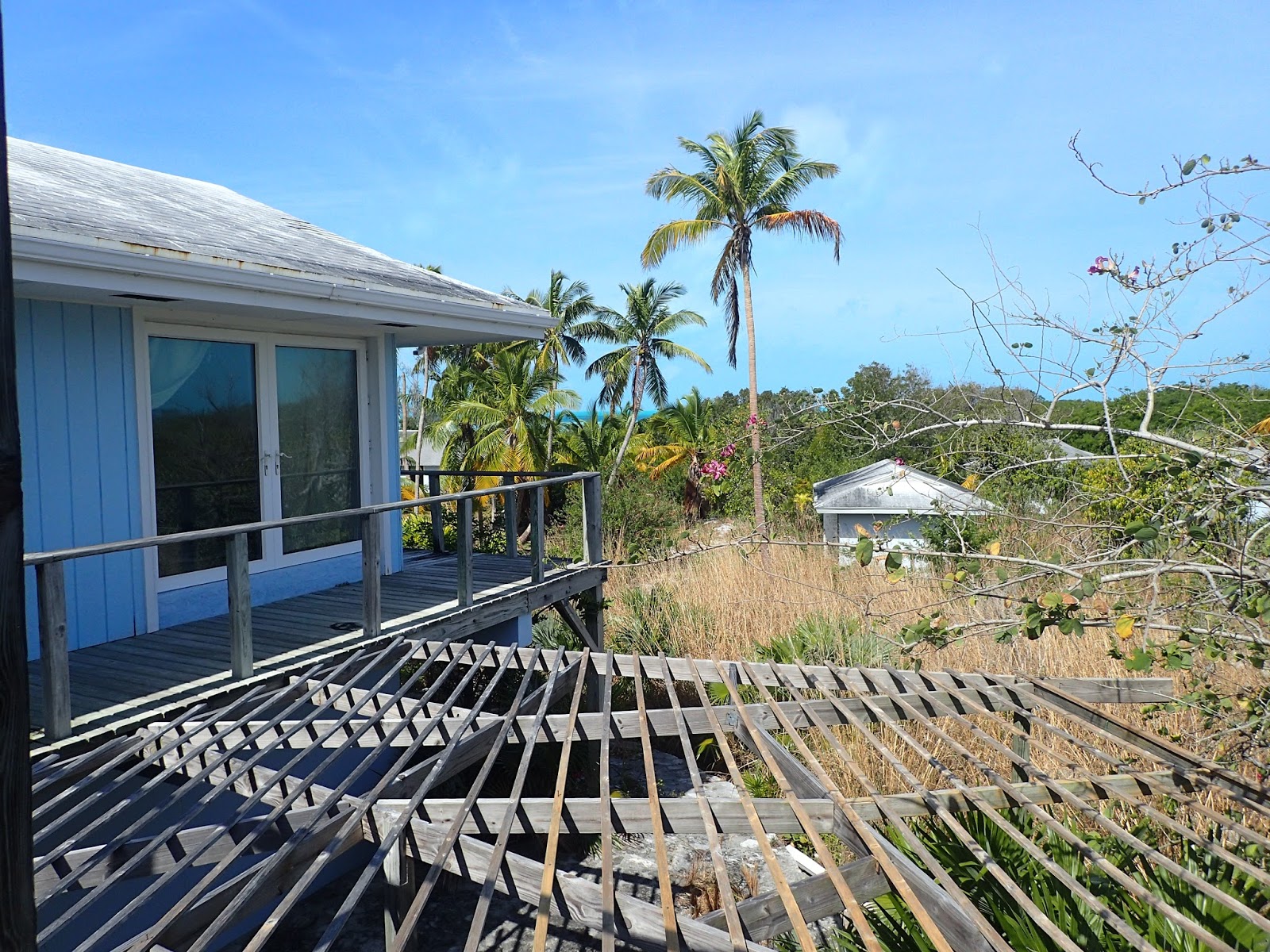 We made it to the take-out well over an hour late and had to use the emergency cell phone to let Dallas know we were back. Thankfully he was near by. We quickly unloaded and organized the gear as Dallas and fam loaded the boats. They took us across the island, straight to the airport where we dripped through the check in line and security. We had an overnight layover in Miami and spent it sipping beer and eating too much cuban food in our air conditioned hotel room.

The rest of our trip home was uneventful, except maybe for the millions (or billions, perhaps?) of itchy bug bites we battled for the following few weeks. Turns out the little pesky sand fleas (aka "no-see-ums") were doing more damage than we realized at the time. Our scars have since healed and we are happily letting the memory fade as well. Aquamarine water, warm breezes, soft sand, and peaceful solitude linger in our minds instead...and these memories have a way of crowding everything else out.
Posted by Carl and Tory Bauer at 1:17 AM

Lovely! What a great adventure.