They flew in to DIA without a hitch Friday night and took up residence on our brand-spankin' futon. The first order of business on Saturday was a backcountry ski trip to Rocky Mountain National Park's Flattop Mtn. After a few miles, we (minus Tory, who was working) broke treeline onto a lovely patch of snow... 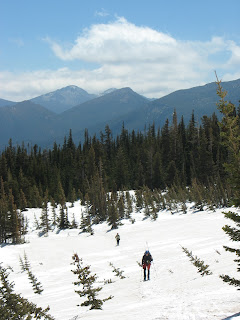 ...then lost it, which forced us to go boulder-bounding. Not fun in ski/snowboard boots. Like a good boy, Paul hauled Heidi's skis up the rough parts. 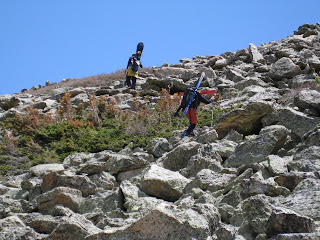 We finally got to the top of a suitable slope at ~2pm, and the snow was getting a bit wet. Paul thrashing some slush for one very impressed onlooker (a.k.a. Heidi). 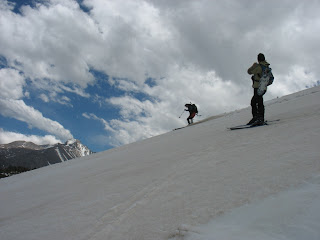 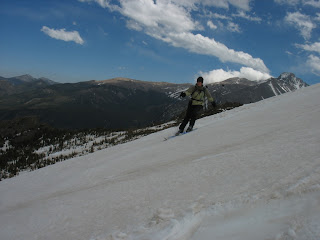 Overall, not a bad trip. The snow conditions weren't the best because of our late start, but the views were of course top notch. Here's a shot of some of the peakier peaks we saw on our journey (behind sherpa Paul). 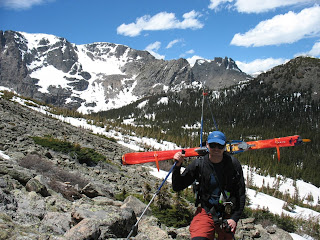 And glad to be back at the car. 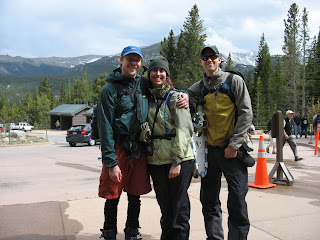 We spent Sunday touring around Boulder on bikes. P and C, wishing they were in kayaks charging down Boulder Creek. 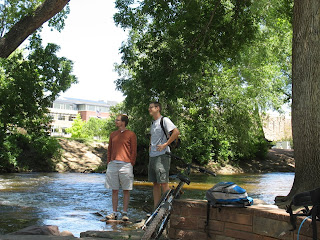 P and H on the 11th floor of the Gamow Tower on the CU campus, where Carl works and where he occasionally dishes out hefty Sunday morning physics lectures...lucky us! (Paul seemed to have followed it, actually...) 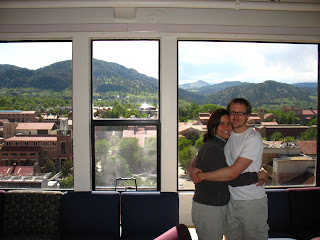 Next it was on to Centennial Park at the west end of Pearl St., where we hiked a short trail and scrambled on rocks at the top.
Tory, hanging on tight and enjoying the view 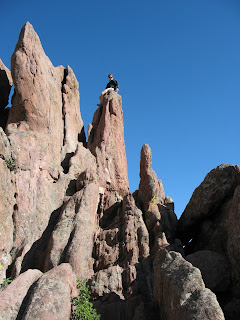 Carl, braced against the gusty winds at the top of the red rocks 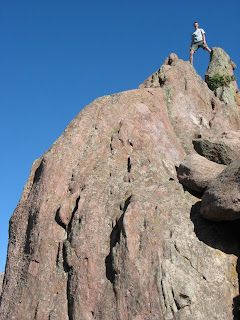 Paul on the edge (of reason). 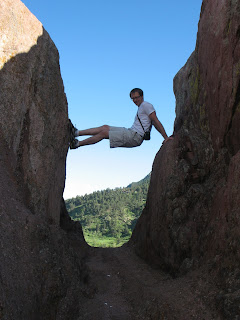 Group shot! You should be scared because it drops a good 100ft. behind us. 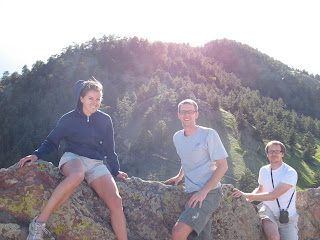 Monday morning, Paul and Carl did a mountain bike ride at Hall Ranch near Lyons, CO. Thanks to Scott Knappmiller for letting us borrow some wheels! 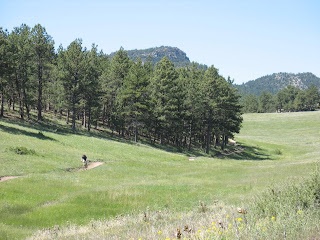 We also should mention all the gourmet meals we enjoyed during their visit. Saturday night, they revealed to us the magic of mini pizzas on corn tortillas. Nothing better. Sunday night was our turn with a shrimp asparagus pasta dish. And Monday topped it off with a greasy whole chicken and insalata caprese. The happy group in our sweltering apartment (we're too cheap to turn the A/C on, plus it uses so much energy, bleeeah!). 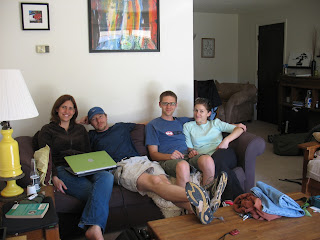 Hey, let's do this again sometime guys!
Posted by Carl and Tory Bauer at 8:17 AM