5-17-07
Brother Paul came out to visit for the weekend after a few days at a rocket scientist conference in Denver. Tory knows how white and nerdy us boys can get, so she split town for California. She will cover that later... The first order of business after picking up Paul from his hotel in downtown Denver was hunting down a certain house on Lewis St., specifically, the Denver residence of our parents when Paul and my sis, Emily, were still little rascals. We tried not to linger like some creepy voyeurs, so here's the best shot: 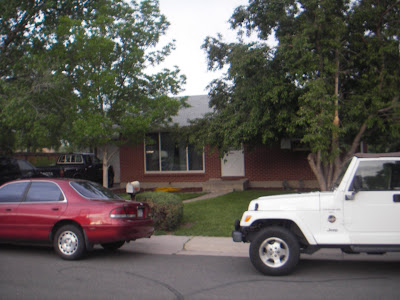 The three of us went out to dinner courtesy of Paul's per diem (Tory left the next day) and the rest of the night was uneventful. The next day, Paul and I embraced the true reason for his visit: spring skiing/snowboarding in Colorado's backcountry. With all the wonderful gifts from the wedding, I am now fully stocked to go bury myself in an avalanche. It was a sunny Colorado morning as we bounced our way up a dirt road toward the continental divide at Rollins Pass, ~50 miles SW from Boulder as the crow flies. After a good 45 min of 4x4'ing up to what would have been a better starting point, we hit a wall of snow at the first switchback and were forced to turn back. A section of the out-and-back detour, the road was actually a lot worse than you see here... 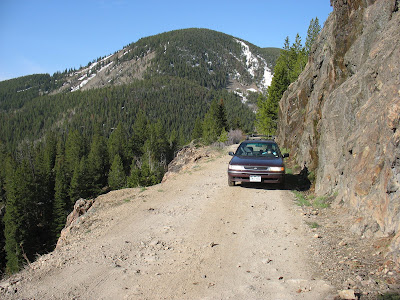 We ended up hiking from the mouth of the Moffat train tunnel, a six-mile passage underneath the divide. Paul chasing a train like a crazy person. He almost caught it. 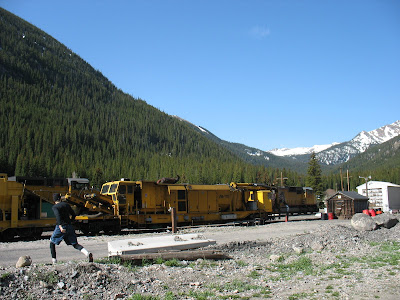 This hike took us through the James Peak wilderness area. 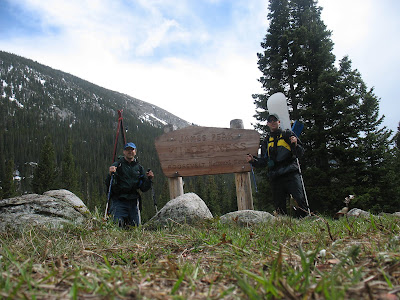 For the first few miles of walking along streams and south-facing slopes, we hiked/post-holed through patchy, wet snow. 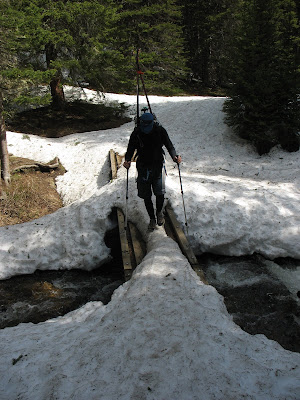 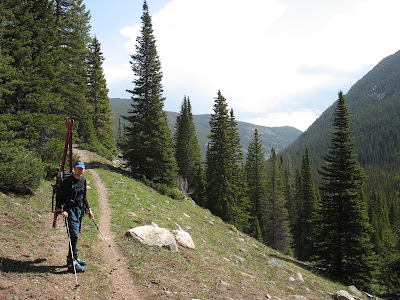 We finally geared up as we neared treeline, where the going got steeper, but a bit more comfortable, since we didn't have to haul our gear by hand on clumsy boots. At nearly 11,000 ft., the breaks became more frequent and each step a little shorter. Above treeline, the view was gorgeous with vast untouched ski slopes tantalizingly close. A series of pictures on the way up to the top: 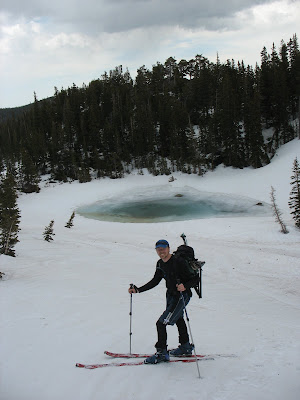 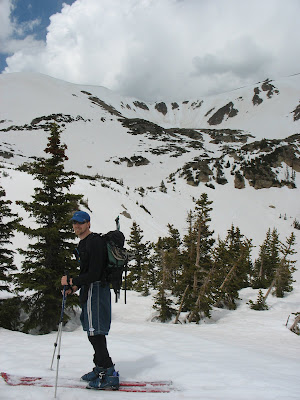 Our final destination was the slope directly above my left ear in the next picture: 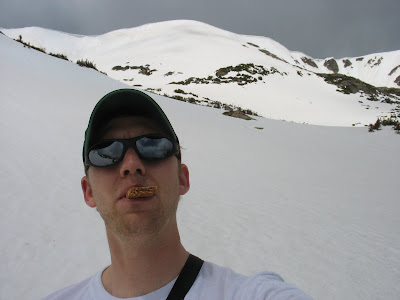 Unfortunately, our pointless sidetrip in the car wasted some precious clear morning skies. As we approached the home stretch to the top, the notorious Colorado thunderheads rolled in. The snow was getting slushy as well this late in the day and we were climbing up an increasingly steepening slope. Just ~100 vert. ft. from the top, we decided to turn around before getting buried under a wet slab or smitten by a lightning bolt. Heartbreaking, yes, but necessary, we thought. A quick panorama before lacing up for the descent:

As the blizzard unleashed, we were content with our decision to head down. The turns were good and that's all that mattered. 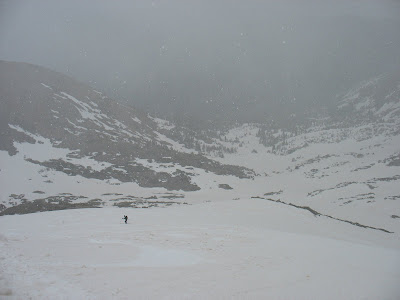 Then when the thunder crackled immediately over our heads, we got the -bleep- off of that mountain. The weather got nice again by the time we arrived at the car around 4-5pm. Long day.

5-18-07
There was no chance on getting up early for another ski trip the day after, so we sat around and snacked for most of the morning. That afternoon, we drove up into the foothills of Boulder and scrambled on some rocks, Paul trying to teach me a few things about climbing. The only thing I succeeded at was almost ripping off my finger by getting my ring caught on a little nip of rock (pic taken the day after, ring sliced into my finger). 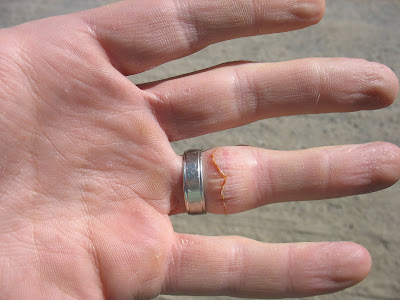 On the way back into town, I showed Paul Boulder Creek and told him about floating it on inner tubes. He demanded we float it that afternoon. We grabbed the inner tubes from the apartment and got back to the stream just as the afternoon storms rolled in. It was so cold that you couldn't control the volume of your voice and the flow was a bit swifter than we thought. After a small drop pulled us under for a few seconds, we called it quits. A good rapid: 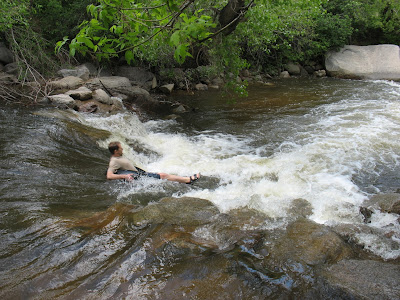 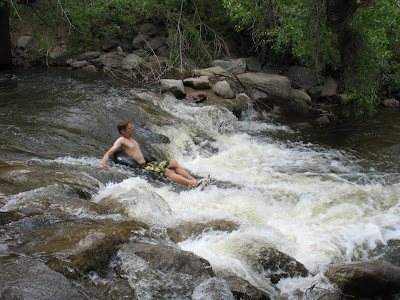 5-19-07
Saturday was another trip to the backcountry. Berthoud Pass, on the way to Winter Park, promised us a slightly easier trek and definitely no 4x4 roads. We got to the trailhead by 9am with ~2000 ft. of vertical to overcome. The snow was quite slushy in certain places under the trees, and Paul was having a bit of trouble sinking in heavy snow with his skis on. Once on the open slopes above treeline, it was clear sailing to the top, with even a bit of good ol bare-ground walking on the ridge. Some nice views from up there... 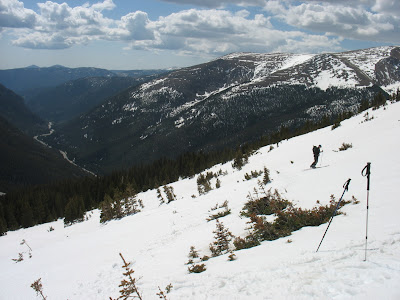 At the summit and top of Stanley Slide (behind the camera in the first picture). Couldn't be too much more of a dork with these poses... 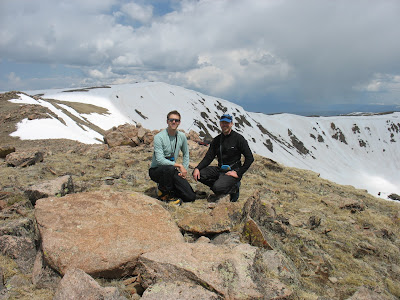 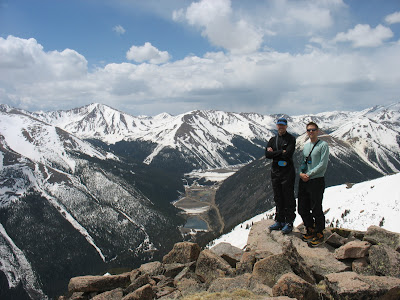 Exploring the cornices seen in the background of the picture before the last: 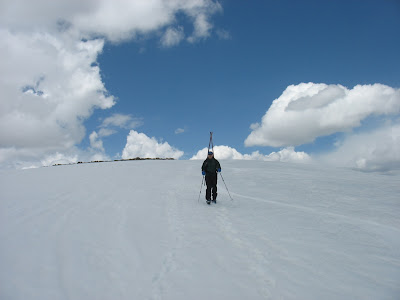 And finally on our way down. Paul shreddin'... 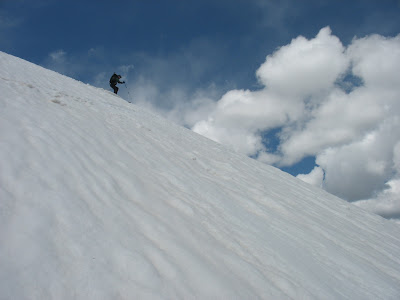 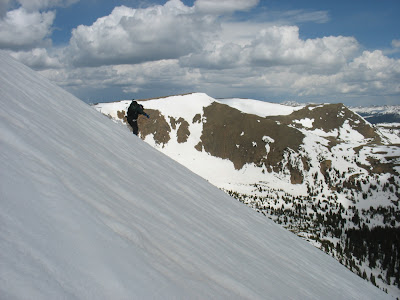 Gotta get myself in there...

After a bite to eat in a small town called Empire on the way back, we spent the rest of the evening doing nerdy stuff with the Python programming language. It was good to see big bro and finally have a partner to hit the spring slopes with. Hopefully next time he will bring his girlfriend Heidi so she can show us how it's really done on Boulder Creek. Here's Tory with an update from California.

Mmkay, it was a whirlwind weekend, but we had a blast of a time in Paso Robles!
Some lovely ladies at home, prior to our departure... On Friday night, Christina, Lisa and I piled ourselves and our luggage into Lisa's Mini Cooper and set out for the central coast. We made it to San Luis Obispo by about 11 that night and headed out on the town with Lisa's old roomie, Jenna.

On Saturday morning had breakfast and cruised up to Paso Robles for a taste of the wine country's finest!
Christina and me, flashing our classy plastic necklaces in front of the official event sign... 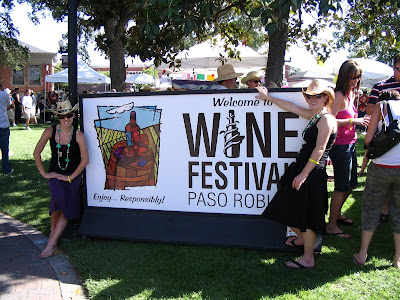 We always start with the best intentions, but in the end the 4 S's of responsible wine tasting were lost on us, yet again. oops. 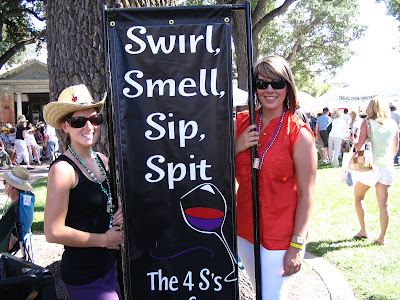 After the festival we headed back down to SLO for dinner at Firestone and a long nap! We drove back home Sunday morning and I was back in Boulder by 10pm that night. The weekend passed all too quickly (not even enough time to take many photos, apparently) but it was wonderful to see everyone and to be back in one of my favorite places. Counting down the days until next year!
Posted by Carl and Tory Bauer at 11:24 PM

Good reading. Colorado looks pretty....Em and I will make it out there someday.

That water looks cold! Notice how you both appear to be gasping for air as you go down that rapid (shoulders hunched, chests inflated...). Nice life jackets....don't you guys listen to the local news stories about water safety?